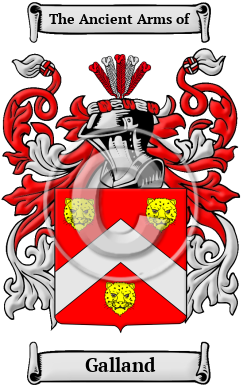 Early Origins of the Galland family

The surname Galland was first found in Essex, where the first on record was as a forename, Galant fitz Richard who was listed in the Feet of Fines in 1210. A few years later, the Hundredorum Rolls listed Adam Galland in Essex in 1274 and Thomas Galaunt in Suffolk in 1275. Later, the Feet of Fines for Essex listed John Galant in 1326. [1]

Further to the north in Scotland, William Gallant was retoured heir of William Gallant, by his father, in the lands of Newnoth, Aberdeenshire in 1655. [5] The name is equally Scottish/English and French.

Early History of the Galland family

This web page shows only a small excerpt of our Galland research. Another 61 words (4 lines of text) covering the years 1665, 1507, 1507 and are included under the topic Early Galland History in all our PDF Extended History products and printed products wherever possible.

Spelling variations of this family name include: Gallant, Galland, Gallan and others.

Notable among the family at this time was William Galeon (d. 1507), learned Augustinian, born in Norfolk, and became a friar eremite in the Augustinian monastery of Lynn Regis. "He was chiefly renowned for his minute knowledge of theology, and took a D.D. degree probably before he left...
Another 48 words (3 lines of text) are included under the topic Early Galland Notables in all our PDF Extended History products and printed products wherever possible.

In France, the name Galland is the 630th most popular surname with an estimated 7,496 people with that name. [6]

Migration of the Galland family to Ireland

Some of the Galland family moved to Ireland, but this topic is not covered in this excerpt.
Another 60 words (4 lines of text) about their life in Ireland is included in all our PDF Extended History products and printed products wherever possible.

Galland migration to the United States +

Galland Settlers in United States in the 18th Century

Galland Settlers in United States in the 19th Century

Galland Settlers in Canada in the 18th Century

Historic Events for the Galland family +