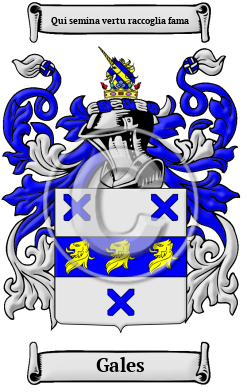 The earliest origins of the family name Gales date back to the Anglo-Saxon culture of Britain. It was a name given to a person who was known for their cheerful personality and their jovial disposition. The surname Gales was originally derived form the Old English word gal, which described a person as being pleasant and merry. [1]

Early Origins of the Gales family

The surname Gales was first found in Yorkshire where the Yorkshire Poll Tax Rolls of 1379 list Johanna del Gaylle; Agnes del Gaylle; Johannes del Gayle; and Willelmus Gayle as all holding lands there at that time. [2]

One source claims the name is a "Scottish Highlander," [3] and in Scotland, "strangers to the Gadhelic people were called Gall, and this gave rise to surnames such as Gauld, Gall, and the Lowland Galt. Gall in the common speech was pronounced 'Gaw.' A rather common surname in Perth and especially in the Muirton of Balhousie during the seventeenth and eighteenth centuries. John Gal was witness to a grant to the Blackfriars of Perth in 1334." [4]

Early History of the Gales family

Before English spelling was standardized a few hundred years ago, spelling variations of names were a common occurrence. Elements of Latin, French and other languages became incorporated into English through the Middle Ages, and name spellings changed even among the literate. The variations of the surname Gales include Gale, Gail, Gaile, Gales and others.

Notables of the family at this time include George Gale, Mayor of York; Dunstan Gale (fl. 1596), an English poet, author of a poem entitled 'Pyramus and Thisbe,' supposed to have been printed for the first time in 1597. [5] Theophilus Gale (1628-1678), was an English educationalist, nonconformist and theologian of dissent from Kingsteignton, Devon; Thomas Gale (1635?-1702), an English classical scholar, antiquarian and cleric from Scruton, Yorkshire; Mildred Gale (1671-1701), born Mildred Warner in the Colony of Virginia, paternal grandmother of President George Washington; and John Gale (1680-1721), an English Baptist theologian; and his son...
Another 95 words (7 lines of text) are included under the topic Early Gales Notables in all our PDF Extended History products and printed products wherever possible.

Gales migration to the United States +

Gales Settlers in United States in the 19th Century

Gales Settlers in New Zealand in the 19th Century