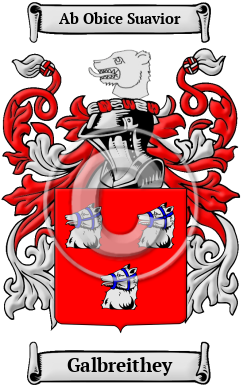 The clans of the Pictish people in ancient Scotland were the ancestors of the first people to use the name Galbreithey. It was a name for a person who came from Briton. The surname Galbreithey comes from the Gaelic words gall, which means stranger, and Bhreathnach, which means Briton. This surname was given to those who were described as the strangers from Briton. Galbreithey is therefore a nickname surname, which belongs to the category of hereditary surnames. Nicknames form a broad and miscellaneous class of surnames, and can refer directly or indirectly to one's personality, physical attributes, mannerisms, or even their habits of dress. Members of the Galbreithey family settled in Angus, prior to the Norman invasion of England, in 1066.

Early Origins of the Galbreithey family

The surname Galbreithey was first found in Angus (Gaelic: Aonghas), part of the Tayside region of northeastern Scotland, and present day Council Area of Angus, formerly known as Forfar or Forfarshire where the first Galbraith chief can be traced back to the 12th century. As this chief married a daughter of the Earl of Lennox the house must have been of a noble status. Sir William Galbraith, who was the fourth Chief of the Clan, became highly involved with Scottish national affairs. He was a co-regent of Scotland in 1255, serving a guardian of the young King Alexander III.

Early History of the Galbreithey family

This web page shows only a small excerpt of our Galbreithey research. Another 156 words (11 lines of text) covering the years 1594, 1543, 1528, 1528 and are included under the topic Early Galbreithey History in all our PDF Extended History products and printed products wherever possible.

In the Middle ages, spelling and translation were not yet regulated by any general rules. spelling variations in names were common even among members of one family unit. Galbreithey has appeared Galbraith, Galbreath, Galbreith, Galbreth, Galbrith, Galberth and many more.

Notable amongst the family at this time was Robert Galbraith (d. 1543), Scottish judge, "a priest and treasurer of the Chapel Royal at Stirling, in which capacity he received a charter of the lands of Mydwyn Schelis, near Berwick, dated 5 July 1528. He...
Another 44 words (3 lines of text) are included under the topic Early Galbreithey Notables in all our PDF Extended History products and printed products wherever possible.

Migration of the Galbreithey family to Ireland

Some of the Galbreithey family moved to Ireland, but this topic is not covered in this excerpt.
Another 57 words (4 lines of text) about their life in Ireland is included in all our PDF Extended History products and printed products wherever possible.

Migration of the Galbreithey family

Faced by this persecution and the generally unstable political climate of those days, many Scots chose to leave their homeland for Ireland, Australia, and North America in search of greater opportunity and freedom. The colonies across the Atlantic were the most popular choice, but a passage there was neither cheap nor easily suffered. Passengers arrived sick and poor, but those who made it intact often found land and more tolerant societies in which to live. These brave settlers formed the backbone of the burgeoning nations of Canada and the United States. It is only this century that the ancestors of these families have begun to recover their collective identity through the patriotic highland games and Clan societies that have sprung up throughout North America. Research into early immigration and passenger lists revealed many immigrants bearing the name Galbreithey: James Galberth who settled in Charles Town in 1767; Angus and his wife Katrine Galbreath settled in Wilmington in 1774; Andrew, Daniel, George, James, John, Robert, Samuel, Thomas and William Galbraith all arrived in Philadelphia between 1840 and 1865..