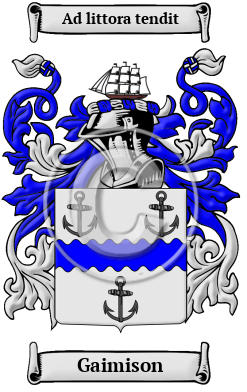 The age-old Hebrides islands and the west coast of Scotland are the ancestral home of the Gaimison family. Their name comes from "son of James". [1]

Early Origins of the Gaimison family

The surname Gaimison was first found in on the Isle of Bute, where "a family named Jamieson or Neilson held the office of Crowner of Bute from the beginning of the fourteenth century or earlier to the seventeenth century. He was granted lands by Robert the Bruce for his services rendered to the King. King James II confirmed these grants later and further bestowed on the Jamiesons other territories on the Isle of Arran, particularly that of Over Kilmory. The office of Coroner (Crowner) was hereditary with the family. " [2]

Early History of the Gaimison family

Medieval spelling was at best an intuitive process, and translation between Gaelic and English was no more effective. These factors caused an enormous number of spelling variations in Dalriadan names. In fact, it was not uncommon to see a father and son who spelled their name differently. Over the years, Gaimison has been spelled Jamieson, Jameson, Jamison, Jamyson, Jimisone and many more.

Notable amongst the Clan from early times was George (Jamesone) Jameson (c. 1587-1644), Scotland's first eminent portrait-painter. "Born at Aberdeen, probably in 1588 (Bulloch, George Jamesone, p. 32), he was second son of Andrew Jamesone, master mason, and his wife Marjory, daughter of Gilbert Anderson, merchant, one of the magistrates of the city. After having practised as a portrait-painter in Scotland, he, according to a generally accepted tradition, which derives some corroborative evidence from the style of his painting, studied under Rubens in Antwerp, and was a fellow-pupil of Vandyck." [4] William Jameson (fl. 1689-1720), was "lecturer on history at Glasgow University...
Another 104 words (7 lines of text) are included under the topic Early Gaimison Notables in all our PDF Extended History products and printed products wherever possible.

Migration of the Gaimison family to Ireland

Some of the Gaimison family moved to Ireland, but this topic is not covered in this excerpt.
Another 82 words (6 lines of text) about their life in Ireland is included in all our PDF Extended History products and printed products wherever possible.

Migration of the Gaimison family

Scottish settlers arrived in many of the communities that became the backbones of the United States and Canada. Many stayed, but some headed west for the endless open country of the prairies. In the American War of Independence, many Scots who remained loyal to England re-settled in Canada as United Empire Loyalists. Scots across North America were able to recover much of their lost heritage in the 20th century as Clan societies and highland games sprang up across North America. Early immigration and passenger lists have documented some of the first Gaimisons to arrive on North American shores: Stephen Jamieson settled in Maryland in 1633; and David Jamieson settled in Boston in 1652. Alexander Jamison settled in America in 1685; they also settled in Pennsylvania in the 19th century. George Jemmison was a soldier of St. John's, Newfoundland, in 1778.