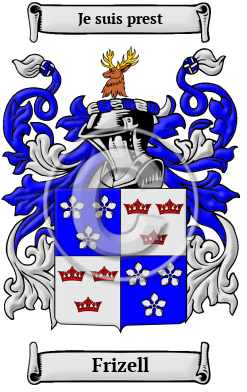 The origins of the Frizell family name are somewhat of a mystery. The earliest recorded versions of the name, from the 12th century, are de Fresel, de Friselle and de Freseliere, which appear to be Norman; however they have never been found in Normandy itself. The other possibility is that the name was derived from Gaelic, but no-one has been able to locate a Gaelic name from which Frizell might be derived. It is thought that it was in later years that the "fraisse," or strawBerry was adopted as part of the Armorial bearings of this family due to the similarity of the pronunciation of this French word to the Frizell surname.

Early Origins of the Frizell family

The surname Frizell was first found in Tweedale, Peebles-shire, where Sir Simon Frasee held part of the lands of Keith. There is a record of Symon Fraser giving the church of Keith to the Abbey of Kelso in Circa 1160. Early records include Gilbert Fraser, who witnessed a charter by Walter Olifard in 1210. A later Sir Simon known as "the Scottish Patriot" was a supporter of Sir William Wallace in the struggle for independence.

Early History of the Frizell family

Migration of the Frizell family to Ireland

Some of the Frizell family moved to Ireland, but this topic is not covered in this excerpt.
Another 82 words (6 lines of text) about their life in Ireland is included in all our PDF Extended History products and printed products wherever possible.

Frizell migration to the United States +

Frizell Settlers in United States in the 17th Century

Frizell Settlers in United States in the 18th Century

Frizell Settlers in Canada in the 19th Century

Frizell Settlers in New Zealand in the 19th Century