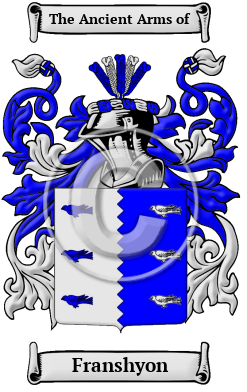 Franshyon is a name that first reached England following the Norman Conquest of 1066. The Franshyon family lived in Norfolk, at Great Fransham or Little Fransham, parishes in the union of Mitford and Launditch, hundred of Launditch. Little Fransham's old Hall, "now a farmhouse, contains a room in which Queen Elizabeth is said to have slept one night, when on a tour through Norfolk." [1]

Early Origins of the Franshyon family

The surname Franshyon was first found in Norfolk where they held a family seat as Lords of the Manor of the village of Fransham. The village of Fransham in 1086 was held by Gilbert from William de Warenne, the overlord whose line later became the Dukes of Warwick. Conjecturally, the Fransham name is directly descended from Gilbert, who was probably the son or nephew of William of Warenne. William, Count of Warren in Normandy, was a great friend and trusted companion of Duke William, the Conqueror of England in 1066. He married Gundreda, daughter of Queen Matilda. William, who fought at the Battle of Hastings, was one of the nobles who ruled England when Duke William returned to Normandy from time to time.

Early History of the Franshyon family

This web page shows only a small excerpt of our Franshyon research. Another 98 words (7 lines of text) covering the years 1198, 1273, 1334, 1730, 1810, 1660 and 1743 are included under the topic Early Franshyon History in all our PDF Extended History products and printed products wherever possible.

It is only in the last few hundred years that the English language has been standardized. For that reason, Anglo-Norman surnames like Franshyon are characterized by many spelling variations. Scribes and monks in the Middle Ages spelled names they sounded, so it is common to find several variations that refer to a single person. As the English language changed and incorporated elements of other European languages such as Norman French and Latin, even literate people regularly changed the spelling of their names. The variations of the name Franshyon include Fransham, Francham, Frensham, Frenchum, Franchum, Franchem, Franshem, Frencham, Franchomme and many more.

Outstanding amongst the family at this time was John Fransham (1730-1810), English freethinker, son of Thomas and Isidora Fransham. "He showed precocity at an elementary school. He wrote sermons, which the rector of St. George's thought good enough to submit to the dean. The aid of a relative, probably Isaac Fransham (1660-1743), an attorney, enabled him to study...
Another 58 words (4 lines of text) are included under the topic Early Franshyon Notables in all our PDF Extended History products and printed products wherever possible.

Migration of the Franshyon family

Faced with the chaos present in England at that time, many English families looked towards the open frontiers of the New World with its opportunities to escape oppression and starvation. People migrated to North America, as well as Australia and Ireland in droves, paying exorbitant rates for passages in cramped, unsafe ships. Many of the settlers did not make the long passage alive, but those who did see the shores of North America were welcomed with great opportunity. Many of the families that came from England went on to make essential contributions to the emerging nations of Canada and the United States. Some of the first immigrants to cross the Atlantic and come to North America carried the name Franshyon, or a variant listed above: Stephen Frensham settled in Virginia in 1728; and a Mr Franchomme, who settled in Louisiana in 1719.