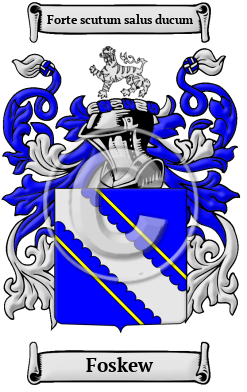 The proud Norman name of Foskew was developed in England soon after Norman Conquest of England in 1066. It was name for a valiant or strong warrior. This name is composed of the Old French elements, fort, which means strong, and escu, which means shield. Sir Richard le Forte was one of the leaders of the Norman army at Hastings. He was a great fighter and protected Duke William by holding a large shield or escue in front of him, hence Fortescue.

The motto of the family, "Forte Scutum salus ducum," meaning 'a strong shield is the safety of commanders,' attests to the family's founder. [1]

Early Origins of the Foskew family

The surname Foskew was first found in Devon at Wymodeston (later called Winston) in the parish of Modbury in the year 1209. [2] [3]

This was "the most ancient seat of the Fortescues, in whose possession it continued from the days of King John to the Reign or Queen Elizabeth." [2]

A current search for Winston in Devon returns nothing other than a reference to Winston Manor. However, the parish of Modbury is today in the South Hams region.

"In Filleigh [Devon] is Castle Hill, the seat of Earl Fortescue, the representative of this most ancient and distinguished family, whose surname, as in their motto, Forte scutum, salus ducum, is said to signify a 'strong shield.' The common ancestor was settled at Wimpston or Wymondeston in Modbury, which, according to the family tradition, was given to Richard le Forte, shield-bearer to the Conqueror, for his good services at Hastings. John Fortescue was settled at Wimpston in 1209 ; and the elder branch continued to live there until early in the seventeenth century. The family branched out from Wimpston to Preston, Spriddleston, Shipham, Wood, Fallapit, Wear Giffard, Filleigh, and Buckland Filleigh in Devon, and settled also in Cornwall, Hertford, Essex, Buckingham, and Ireland." [4]

"Salcombe Castle was the last place in Devon which adhered to the cause of Charles I. The Castle dates from the reign of Henry VIII., and was one of the numerous little strengths built by him on the Western coasts to defend the principal ports from sudden forays. Sir Edmund Fortescue of Fallapit, the Royalist High Sheriff of Devon in 1642, and for many months a prisoner at Winchester House and Windsor Castle, on his release undertook to re fortify and man the ancient walls. Prince Maurice gave him a commission for this purpose in December, 1643, while he was engaged in the siege of Plymouth; and Fortescue evidently carried out his work thoroughly. " [4]

Early History of the Foskew family

Spelling variations in names were a common occurrence in the eras before English spelling was standardized a few hundred years ago. In the Middle Ages, even the literate regularly changed the spellings of their names as the English language incorporated elements of French, Latin, and other European languages. Many variations of the name Foskew have been found, including Fortescue, Fortesque and others.

Outstanding amongst the family at this time was Sir John Fortescue (c.1394-1476), the English jurist. A supporter of the Lancastrian king Henry VI, he was chief justice of the Court of King's Bench from 1442 until 1461. Sir Adrian Fortescue (1476?-1539), was a Knight of St. John and the second son of Sir John Fortescue of Punsborne, Hertfordshire, and grandson of Sir Richard, younger brother of Sir John, the famous chief justice. [5] His third and youngest son, Sir Anthony Fortescue (b. 1535?), was a conspirator who was educated at Winchester. Unlike his elder brother Sir John, Chancellor of the Exchequer, Sir...
Another 119 words (8 lines of text) are included under the topic Early Foskew Notables in all our PDF Extended History products and printed products wherever possible.

Migration of the Foskew family to Ireland

Some of the Foskew family moved to Ireland, but this topic is not covered in this excerpt.
Another 47 words (3 lines of text) about their life in Ireland is included in all our PDF Extended History products and printed products wherever possible.

Foskew migration to the United States +

For many English families, the social climate in England was oppressive and lacked opportunity for change. For such families, the shores of Ireland, Australia, and the New World beckoned. They left their homeland at great expense in ships that were overcrowded and full of disease. Many arrived after the long voyage sick, starving, and without a penny. But even those were greeted with greater opportunity than they could have experienced back home. Numerous English settlers who arrived in the United States and Canada at this time went on to make important contributions to the developing cultures of those countries. Many of those families went on to make significant contributions to the rapidly developing colonies in which they settled. Early North American records indicate many people bearing the name Foskew were among those contributors:

Foskew Settlers in United States in the 17th Century