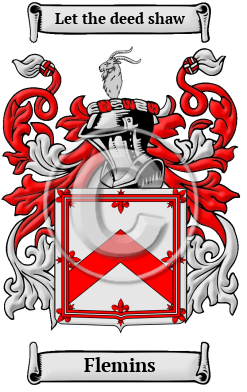 The earliest recorded instance of the Flemins family name show the family in Flanders, which was located on the North Sea and was a prosperous center for the cloth industry during the Middle Ages. The name is derived from the Anglo-French word "fleming," which comes from the Old French word "flamanc," which means "a Fleming."

Early Origins of the Flemins family

The surname Flemins was first found in Lanarkshire. "Large territories in the Upper Ward of Lanarkshire were later in possession of a family of this name. Their residence was Boghall Castle near Biggar Theobald the Fleming (Theobaldus Flamaticus) had a grant of land on the Douglas Water from the abbot of Kelso between 1147-1160. Baldwin the Fleming was sheriff of Lanark c. 1150. Jordan Fleming was taken prisoner at Alnwick along with William the Lion in 1174. [2]

Early History of the Flemins family

Of note in the family at this time was Thomas Fleming (c.1363-c. 1382), 2nd Earl of Wigtown, who was forced through financial hardship to sell the earldom to Archibald the Grim, Lord of Galloway and Earl of Douglas in 1372. There was a second creation of the Earldom of Wigtown, for John Fleming (1567-1619), Lord Fleming and Cumbernauld, in 1606. Robert Fleming the elder (1630-1694), was...
Another 65 words (5 lines of text) are included under the topic Early Flemins Notables in all our PDF Extended History products and printed products wherever possible.

Migration of the Flemins family to Ireland

Some of the Flemins family moved to Ireland, but this topic is not covered in this excerpt.
Another 138 words (10 lines of text) about their life in Ireland is included in all our PDF Extended History products and printed products wherever possible.

Migration of the Flemins family

An inquiry into the early roots of North American families reveals a number of immigrants bearing the name Flemins or a variant listed above: Abraham Fleming, who arrived in Boston in 1635; Elizabeth Fleming, who settled in Virginia in 1650; as did Christopher Fleming in 1653; Alexander Fleming, who came to Charleston, South Carolina in 1768.