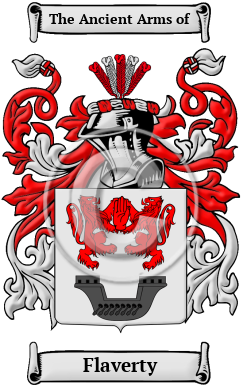 The Irish surnames in use today are underpinned by a multitude of rich histories. The name Flaverty originally appeared in Gaelic as "O Flaithbheartaigh," which means "bright ruler."

Early Origins of the Flaverty family

The surname Flaverty was first found in Connemara (Irish : Conamara), which derives from Conmhaicne Mara (meaning: descendants of Con Mhac, of the sea)), County Galway in Connacht where the name claims descent from Flaithbertaigh Ua Flaithbertaigh, King of Connacht, who died 1098. Flaithbertaigh was the first bearer of the surname O'Flaherty, and was Lord of Maigh Seola in what is now County Galway. [1]

Another source gives this background about the family: "This family, whose tribe name was Muintir Murchadha, traced their descent from Flaibheartach, twenty-second in descent from Eochaidh Muighmeadhon, king of Ireland, who died in 366. They were at first settled in Magh Seola, to the east of Lough Corrib, but in the thirteenth century were driven from their original home by the O'Connors, and conquered a new territory in West Connaught from Lough Corrib to the sea. There were several septs of the clan." [3]

Early History of the Flaverty family

This web page shows only a small excerpt of our Flaverty research. Another 135 words (10 lines of text) covering the years 1377, 1407, 1593, 1589, 1629 and 1718 are included under the topic Early Flaverty History in all our PDF Extended History products and printed products wherever possible.

During the Middle Ages, a standardized literary language known by the general population of Ireland was a thing of fiction. When a person's name was recorded by one of the few literate scribes, it was up that particular scribe to decide how to spell an individual's name. So a person could have several spelling variations of his name recorded during a single lifetime. Research into the name Flaverty revealed many variations, including Flaherty, O'Flaherty, Flaverty, Laverty, Faherty and many more.

Flaverty migration to the United States +

In the 18th and 19th centuries, thousands of Irish families fled an Ireland that was forcibly held through by England through its imperialistic policies. A large portion of these families crossed the Atlantic to the shores of North America. The fate of these families depended on when they immigrated and the political allegiances they showed after they arrived. Settlers that arrived before the American War of Independence may have moved north to Canada at the war's conclusion as United Empire Loyalists. Such Loyalists were granted land along the St. Lawrence River and the Niagara Peninsula. Those that fought for the revolution occasionally gained the land that the fleeing Loyalist vacated. After this period, free land and an agrarian lifestyle were not so easy to come by in the East. So when seemingly innumerable Irish immigrants arrived during the Great Potato Famine of the late 1840s, free land for all was out of the question. These settlers were instead put to work building railroads, coal mines, bridges, and canals. Whenever they came, Irish settlers made an inestimable contribution to the building of the New World. Early North American immigration records have revealed a number of people bearing the Irish name Flaverty or a variant listed above, including:

Flaverty Settlers in United States in the 19th Century