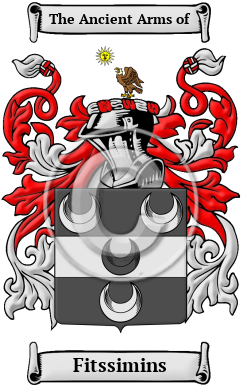 Despite the fact that the Irish already had developed a system of hereditary surnames, the Anglo-Norman invaders imported their own naming principles. The Strongbow invasion marked the first introduction of non-Gaelic elements into Ireland. One of the most common types of surnames at this time was the patronymic surname, which was formed from the name of the initial bearer's father. Often, and especially in the case of French names, this was done through the addition of a diminutive suffix to the given name, such as "-ot," "-et," "-un," "-in," or "-el." Occasionally, two suffixes were combined to form a double diminutive, as in the combinations of "-el-in," "-el-ot," "-in-ot," and "-et-in." Another way of forming patronymic names used by the Strongbownians was the use of the prefix "Fitz-," which was derived from the French word "fils," and ultimately from the Latin "filius," both of which mean "son." Although this prefix probably originated in Flanders or Normandy, it is now unknown in France and is found only in Ireland. The surname Fitssimins is derived from the personal name Simon. The common Norman form of this name was Simund, which was ultimately derived from the personal name "Shim'on," which is derived from the verb "sham'a," which means to "hearken." The name features the distinctive Irish patronymic prefix "Fitz," which means "son of" in Anglo-French. The Gaelic form of the surname Fitssimins is Mac Shiomóin. Variations in the spelling of this surname were extremely common.

Early Origins of the Fitssimins family

The surname Fitssimins was first found in County Cavan, where they had been granted lands by the Earl of Pembroke for their assistance in the Anglo/Norman invasion in 1172. Though Fitzsimmons is an ancient name in Ireland, the surname is actually derived from the Normans and made its way into Ireland by way of England.

Early History of the Fitssimins family

Notable amongst the family up to this time was Walter Fitzsimon, (d. 1511), Archbishop of Dublin and Primate of Ireland (1496-1498.) He was precentor of St. Patrick's Cathedral in 1476; he was the chapter's proxy...
Another 34 words (2 lines of text) are included under the topic Early Fitssimins Notables in all our PDF Extended History products and printed products wherever possible.

Migration of the Fitssimins family

In the mid-19th century, Ireland experienced one of the worst periods in its entire history. During this decade in order to ease the pressure of the soil, which was actually depleted by the effects of the previous years' grain crops, landowners forced tenant farmers and peasants onto tiny plots of land that barely provided the basic sustenance a family required. Conditions were worsened, though, by the population of the country, which was growing fast to roughly eight million. So when the Great Potato Famine of the mid-1840s hit, starvation and diseases decimated the population. Thousands of Irish families left the country for British North America and the United States. The new immigrants were often accommodated either in the opening western frontiers or as cheap unskilled labor in the established centers. In early passenger and immigration lists there are many immigrants bearing the name Fitssimins: Thomas Fitzsimmons who settled in Maryland in 1776; P. Fitzsimmons settled in Charles Town [Charleston], South Carolina in 1821; Edward Fitzsimmons settled in New York in 1822.