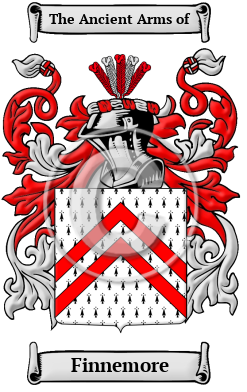 The ancestors of the Finnemore family lived among the ancient Anglo-Saxon tribes of Britain. Finnemore was a name given to a person who was perceived to be splendid and very likable. The surname is derived from the Old French words fin, a nickname for a very elegant man and amour, which is means love.

Early Origins of the Finnemore family

The surname Finnemore was first found in Devonshire where "Sir Gilbert Finemer or Finemore held half a knight's fee of the Honour of Clare, temp. Henry II.; and bore the red chevrons of his suzerain on a field of ermine. The name is also found at Hinksey in Berkshire; and in the church of St. Lawrence at Reading there is a monument to the memory of one of this family, with the following quaint inscription: 'Under they feet, reader, lie the remains of Richard Fynemore, his father's Benjamin, and his brother's Joseph; who coming from Oxon to the burial of a friend, found here his own grave, 1664.' The manor of Tingewick in Buckinghamshire was given in 1210 by this family to the monastery de Monet Rothomago in Normandy. It had passed to them from the Lacys before the reign of Henry III. They probably gave their name to the neighbouring village of Finmore in Oxfordshire. Hugh de Finemer was Vicar of Shabbington, Buckinghamshire in 1348." [1]

Early History of the Finnemore family

This web page shows only a small excerpt of our Finnemore research. Another 224 words (16 lines of text) covering the years 1208, 1349, 1539, 1507 and 1673 are included under the topic Early Finnemore History in all our PDF Extended History products and printed products wherever possible.

Finnemore has been spelled many different ways. Before English spelling became standardized over the last few hundred years, spelling variations in names were a common occurrence. As the English language changed in the Middle Ages, absorbing pieces of Latin and French, as well as other languages, the spelling of people's names also changed considerably, even over a single lifetime. Many variations of the name Finnemore have been found, including Fennimore, Fenemere, Finimore, Finnimore, Fenimore, Fenimere, Finmore and many more.

More information is included under the topic Early Finnemore Notables in all our PDF Extended History products and printed products wherever possible.

Finnemore migration to the United States +

In an attempt to escape the chaos experienced in England, many English families boarded overcrowded and diseased ships sailing for the shores of North America and other British colonies. Those families hardy enough, and lucky enough, to make the passage intact were rewarded with land and a social environment less prone to religious and political persecution. Many of these families became important contributors to the young colonies in which they settled. Early immigration and passenger lists have documented some of the first Finnemores to arrive on North American shores:

Finnemore Settlers in United States in the 19th Century

Finnemore Settlers in New Zealand in the 19th Century