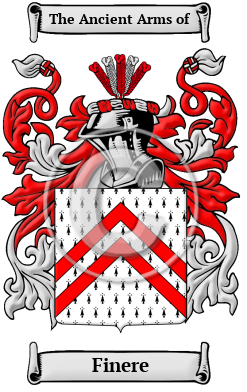 The ancient history of the name Finere dates back to the days of the Anglo-Saxon tribes of Britain. It was a name given to a person who was perceived to be splendid and very likable. The surname is derived from the Old French words fin, a nickname for a very elegant man and amour, which is means love.

Early Origins of the Finere family

The surname Finere was first found in Devonshire where "Sir Gilbert Finemer or Finemore held half a knight's fee of the Honour of Clare, temp. Henry II.; and bore the red chevrons of his suzerain on a field of ermine. The name is also found at Hinksey in Berkshire; and in the church of St. Lawrence at Reading there is a monument to the memory of one of this family, with the following quaint inscription: 'Under they feet, reader, lie the remains of Richard Fynemore, his father's Benjamin, and his brother's Joseph; who coming from Oxon to the burial of a friend, found here his own grave, 1664.' The manor of Tingewick in Buckinghamshire was given in 1210 by this family to the monastery de Monet Rothomago in Normandy. It had passed to them from the Lacys before the reign of Henry III. They probably gave their name to the neighbouring village of Finmore in Oxfordshire. Hugh de Finemer was Vicar of Shabbington, Buckinghamshire in 1348." [1]

Early History of the Finere family

This web page shows only a small excerpt of our Finere research. Another 224 words (16 lines of text) covering the years 1208, 1349, 1539, 1507 and 1673 are included under the topic Early Finere History in all our PDF Extended History products and printed products wherever possible.

Until quite recently, the English language has lacked a definite system of spelling rules. Consequently, Anglo-Saxon surnames are characterized by a multitude of spelling variations. Changes in Anglo-Saxon names were influenced by the evolution of the English language, as it incorporated elements of French, Latin, and other languages. Although Medieval scribes and church officials recorded names as they sounded, so it is common to find one person referred to by several different spellings of his surname, even the most literate people varied the spelling of their own names. Variations of the name Finere include Fennimore, Fenemere, Finimore, Finnimore, Fenimore, Fenimere, Finmore and many more.

More information is included under the topic Early Finere Notables in all our PDF Extended History products and printed products wherever possible.

Migration of the Finere family

Searching for a better life, many English families migrated to British colonies. Unfortunately, the majority of them traveled under extremely harsh conditions: overcrowding on the ships caused the majority of the immigrants to arrive diseased, famished, and destitute from the long journey across the ocean. For those families that arrived safely, modest prosperity was attainable, and many went on to make invaluable contributions to the development of the cultures of the new colonies. Research into the origins of individual families in North America revealed records of the immigration of a number of people bearing the name Finere or a variant listed above: Francis Finmore who settled in Georgia in 1775; John Finnemore arrived in Pennsylvania in 1861.