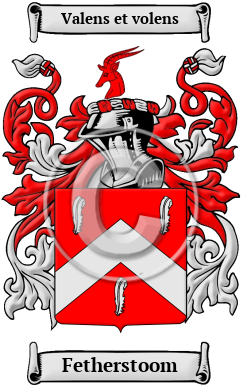 The name Fetherstoom first arose amongst the Anglo-Saxon tribes of Britain. It is derived from their having lived in Featherstone, Northumberland, a township, in the parish and union of Haltwhistle, W. division of Tindale ward. "Featherstone Castle is on the east side of the South Tyne, opposite its confluence with the Hartley burn, in a beautiful situation. It was from an early period the seat of the Featherstonehaugh family, one of whom, Timothy, raised a troop of horse for the king during the civil war, and was knighted under the royal banner. The castle stands in a spacious lawn skirted with trees of luxuriant foliage, and is an exceedingly fine structure, with embattled walls, and four towers, of which three are of recent erection; the interior is enriched by some splendid pictures, and attached are a domestic chapel, and a well-arranged suite of offices." [1]

Early Origins of the Fetherstoom family

The surname Fetherstoom was first found in Northumberland at Featherstone Castle, a large Gothic style country mansion on the bank of the River South Tyne, near the town of Haltwhistle.

Early History of the Fetherstoom family

Notables of the family at this time include Richard Fetherston (Fetherstone, Featherstone) (executed in 1540), an English Roman Catholic priest, chaplain to Catharine of Aragon and tutor to her daughter, Mary Tudor, he was beatified by Pope Leo XIII, 29 December 1886. Francis Fetherston or Fetherstonhaugh (born c. 1575) was an English politician, Member...
Another 53 words (4 lines of text) are included under the topic Early Fetherstoom Notables in all our PDF Extended History products and printed products wherever possible.

Migration of the Fetherstoom family to Ireland

Some of the Fetherstoom family moved to Ireland, but this topic is not covered in this excerpt.
Another 99 words (7 lines of text) about their life in Ireland is included in all our PDF Extended History products and printed products wherever possible.

Migration of the Fetherstoom family

At this time, the shores of the New World beckoned many English families that felt that the social climate in England was oppressive and lacked opportunity for change. Thousands left England at great expense in ships that were overcrowded and full of disease. A great portion of these settlers never survived the journey and even a greater number arrived sick, starving, and without a penny. The survivors, however, were often greeted with greater opportunity than they could have experienced back home. These English settlers made significant contributions to those colonies that would eventually become the United States and Canada. An examination of early immigration records and passenger ship lists revealed that people bearing the name Fetherstoom arrived in North America very early: Richard Featherston purchased land in Virginia in 1607; thirteen years before the "Mayflower"; Thomas Featherstone settled in Pennsylvania in 1848.