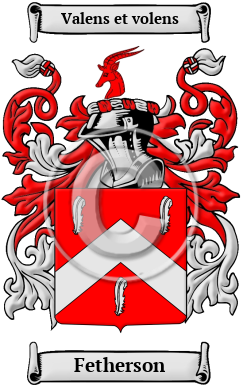 The ancient history of the Fetherson name begins with the ancient Anglo-Saxon tribes of Britain. The name is derived from when the family resided in Featherstone, Northumberland, a township, in the parish and union of Haltwhistle, W. division of Tindale ward. "Featherstone Castle is on the east side of the South Tyne, opposite its confluence with the Hartley burn, in a beautiful situation. It was from an early period the seat of the Featherstonehaugh family, one of whom, Timothy, raised a troop of horse for the king during the civil war, and was knighted under the royal banner. The castle stands in a spacious lawn skirted with trees of luxuriant foliage, and is an exceedingly fine structure, with embattled walls, and four towers, of which three are of recent erection; the interior is enriched by some splendid pictures, and attached are a domestic chapel, and a well-arranged suite of offices." [1]

Early Origins of the Fetherson family

The surname Fetherson was first found in Northumberland at Featherstone Castle, a large Gothic style country mansion on the bank of the River South Tyne, near the town of Haltwhistle.

Early History of the Fetherson family

Until quite recently, the English language has lacked a definite system of spelling rules. Consequently, Anglo-Saxon surnames are characterized by a multitude of spelling variations. Changes in Anglo-Saxon names were influenced by the evolution of the English language, as it incorporated elements of French, Latin, and other languages. Although Medieval scribes and church officials recorded names as they sounded, so it is common to find one person referred to by several different spellings of his surname, even the most literate people varied the spelling of their own names. Variations of the name Fetherson include Featherston, Featherstone, Fetherstone, Featherstonhaugh, Featherstun, Fetherston, Featherstonaugh, Featherstonhoe, Fetherstonhoe, Fetherstunhaugh, Fetherstonaugh and many more.

Notables of the family at this time include Richard Fetherston (Fetherstone, Featherstone) (executed in 1540), an English Roman Catholic priest, chaplain to Catharine of Aragon and tutor to her daughter, Mary Tudor, he was beatified by Pope Leo XIII, 29 December 1886. Francis Fetherston or Fetherstonhaugh (born c. 1575) was an English politician, Member...
Another 53 words (4 lines of text) are included under the topic Early Fetherson Notables in all our PDF Extended History products and printed products wherever possible.

Migration of the Fetherson family to Ireland

Some of the Fetherson family moved to Ireland, but this topic is not covered in this excerpt.
Another 99 words (7 lines of text) about their life in Ireland is included in all our PDF Extended History products and printed products wherever possible.

Fetherson migration to the United States +

Searching for a better life, many English families migrated to British colonies. Unfortunately, the majority of them traveled under extremely harsh conditions: overcrowding on the ships caused the majority of the immigrants to arrive diseased, famished, and destitute from the long journey across the ocean. For those families that arrived safely, modest prosperity was attainable, and many went on to make invaluable contributions to the development of the cultures of the new colonies. Research into the origins of individual families in North America revealed records of the immigration of a number of people bearing the name Fetherson or a variant listed above:

Fetherson Settlers in United States in the 18th Century