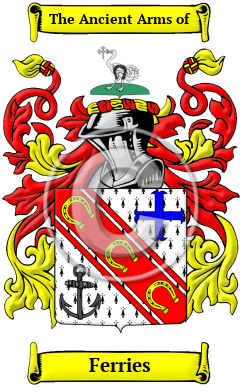 The surname is one of the thousands of new names that the Norman Conquest brought to England in 1066. The Ferries family name, derives one of several place names in Normandy, such as Ferriers, in Gastonois, Normandy. The place name in turn, comes from "ferrière," which refers to an "iron works." They were originally a baronial family from Ferrieres, St. Hilary, near Bernai, Normandy. [1] And early records of 1096, show William de Ferres was a chief leader in the Crusade.

Early Origins of the Ferries family

The surname Ferries was first found in Staffordshire, where Henry de Fereres of Ferriers-St. Hilaire, Lord of Longueville, Normandy was on record in the Domesday Book of 1086; his castle was at Tutbury, Staffordshire and he had large holdings in Derbyshire, as well as lands in 14 other counties. He was "Domesday commissioner, and the son of Walkelin, Lord of Ferrières St.-Hilaire in Normandy, who was slain during the minority of William the Conqueror. Wace makes him, as 'Henri le Sire de Ferriers,' present at the battle of Hastings." [2]

Robert de Ferrers (d. 1139), was a warrior, "the son and heir of Henry de Ferrers [q. v.], the founder of the family. He succeeded his father under Henry I, and is first mentioned in the record of a suit between the abbot of Burton and himself." [2]

Other early records include a Henry le Ferrur on record in 1196 in the Curia Regis Rolls for that same county. Said to be descendents of Henry de Fereres, the Norman Ferrers family held the earldom of Derby from 1138 to 1266. [3]

Further to the south in the parish of St. Cleather, Cornwall another early branch of the family was found. "Reginald de Ferrar held in East Fenton and West Fenton, several knights' fees of land of the honour of Trematon, which are now East and West hundreds." [4]

Early History of the Ferries family

Endless spelling variations are a prevailing characteristic of Norman surnames. Old and Middle English lacked any definite spelling rules, and the introduction of Norman French added an unfamiliar ingredient to the English linguistic stew. French and Latin, the languages of the court, also influenced spellings. Finally, Medieval scribes generally spelled words according to how they sounded, so one person was often referred to by different spellings in different documents. The name has been spelled Ferris, Ferres, Ferries, Ferras, Farris, Farriss, Faries, de Ferrers, Ferriers, Ferrer and many more.

Outstanding amongst the family at this time was Nicholas Ferrar (1592-1637), English theologian, the third son of Nicholas Ferrar, a London merchant, by his wife Mary, daughter of Laurence Wodenoth of Savington Hall, Cheshire. His father ranked high among the merchants of London, and was interested in the adventures of Hawkins, Drake...
Another 51 words (4 lines of text) are included under the topic Early Ferries Notables in all our PDF Extended History products and printed products wherever possible.

Migration of the Ferries family to Ireland

Some of the Ferries family moved to Ireland, but this topic is not covered in this excerpt.
Another 129 words (9 lines of text) about their life in Ireland is included in all our PDF Extended History products and printed products wherever possible.

Ferries migration to the United States +

To escape the political and religious persecution within England at the time, many English families left for the various British colonies abroad. The voyage was extremely difficult, though, and the cramped, dank ships caused many to arrive in the New World diseased and starving. But for those who made it, the trip was most often worth it. Many of the families who arrived went on to make valuable contributions to the emerging nations of Canada and the United States. An inquiry into the early roots of North American families reveals a number of immigrants bearing the name Ferries or a variant listed above:

Ferries Settlers in United States in the 18th Century

Ferries Settlers in United States in the 19th Century

Ferries Settlers in Australia in the 19th Century