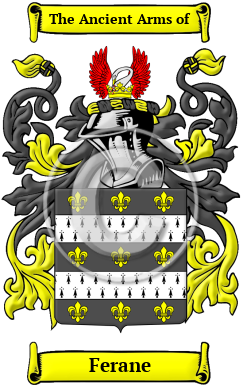 Ferane is a name that dates far back into the mists of early British history to the days of the Anglo-Saxon tribes. It is derived from the given name Farimond. The surname Ferane originally derived from the Old French word Ferrant which meant iron-grey. The surname Ferane was later adopted in England after the Norman Conquest of 1066. In Old English, patronyms were formed by adding a variety of suffixes to personal names, which changed over time and from place to place. For example, after the Norman Conquest, sunu and sune, which meant son, were the most common patronymic suffixes. In the 12th and 13th centuries, the most common patronymic names included the word filius, which meant son. By the 14th century, the suffix son had replaced these earlier versions. Surnames that were formed with filius or son were more common in the north of England and it was here that the number of individuals without surnames was greatest at this time.

Early Origins of the Ferane family

The surname Ferane was first found in the eastern counties of Norfolk, Cambridge and Oxfordshire and it is from this latter shire that we found the first record of the name: Henry Ferant who was listed in the Hundredorum Rolls of 1273. Walter Ferrant was listed in the same census but was found in Cambridgeshire. Finally, the same source lists Benedict Feraunt in Norfolk. [1]

Early History of the Ferane family

It is only in the last few hundred years that the English language has been standardized. For that reason, early Anglo-Saxon surnames like Ferane are characterized by many spelling variations. As the English language changed and incorporated elements of other European languages, even literate people changed the spelling of their names. The variations of the name Ferane include: Farrant, Farrand, Farrin, Farrent, Farren and others.

Notables of this surname at this time include: Richard Farrant (c. 1530-1580), English composer of church music, choirmaster, playwright and theatrical producer who created the Blackfriars Theatre. The date of his first appointment is not known, but he resigned in April, 1564, on becoming Master of the Children of St. George's Chapel, Windsor, of which he is said to have been also a lay vicar and organist. During his tenure of office at Windsor he occupied 'a dwelling house within the Castle, called the Old Commons.'...
Another 86 words (6 lines of text) are included under the topic Early Ferane Notables in all our PDF Extended History products and printed products wherever possible.

Migration of the Ferane family to Ireland

Some of the Ferane family moved to Ireland, but this topic is not covered in this excerpt.
Another 76 words (5 lines of text) about their life in Ireland is included in all our PDF Extended History products and printed products wherever possible.

Migration of the Ferane family

Many English families tired of political and religious strife left Britain for the new colonies in North America. Although the trip itself offered no relief - conditions on the ships were extremely cramped, and many travelers arrived diseased, starving, and destitute - these immigrants believed the opportunities that awaited them were worth the risks. Once in the colonies, many of the families did indeed prosper and, in turn, made significant contributions to the culture and economies of the growing colonies. An inquiry into the early roots of North American families has revealed a number of immigrants bearing the name Ferane or a variant listed above: Edward Farrand, who arrived in Philadelphia in 1853; and John Farrant, who arrived in Philadelphia in 1864.