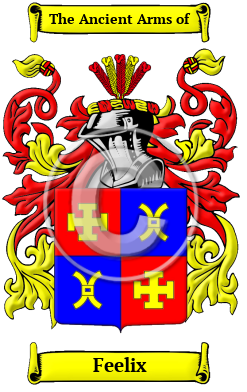 The origins of the Feelix name lie with England's ancient Anglo-Saxon culture. It comes from when the family lived in Normandy where Radulphus Fellex of Normandy 1195 and Nicholas Feliz were listed in the Magni Rotuli Scaccarii Normanniae in 1198. [1]

The name can be used as either a forename or surname and literally translates from Latin as "happy, fruitful, fortunate, lucky." [2] [3]

Saint Felix (d. 647?), was Bishop of Dunwich. He was born and ordained in Burgundy and ventured to England inspired by a desire for missionary work. "He sought Honorius, Archbishop of Canterbury, and told him his desire, whereon Honorius sent him to East Anglia, having previously consecrated him to be bishop of that people. Felix was counted as an English saint, and his festival was fixed on 8 March. Tradition connects Felix with the monastery of Ely." [4]

Early Origins of the Feelix family

The surname Feelix was first found in Sussex where the name was first referenced in the year 1122 when Felix Monchus held estates in that shire. At about the same time, Felix filius Hamonis, and Hamo Felix were both listed in Kent in 1229. [5]

Early History of the Feelix family

This web page shows only a small excerpt of our Feelix research. Another 81 words (6 lines of text) covering the years 1229, 1352, 1455, 1487 and 1498 are included under the topic Early Feelix History in all our PDF Extended History products and printed products wherever possible.

Before the last few hundred years, the English language had no fast system of spelling rules. For that reason, spelling variations are commonly found in early Anglo-Saxon surnames. Over the years, many variations of the name Feelix were recorded, including Felix, Felicks, Fellicks, Feelix, Feelicks, Fealix and many more.

Another 29 words (2 lines of text) are included under the topic Early Feelix Notables in all our PDF Extended History products and printed products wherever possible.

Migration of the Feelix family

To escape oppression and starvation at that time, many English families left for the "open frontiers" of the New World with all its perceived opportunities. In droves people migrated to the many British colonies, those in North America in particular, paying high rates for passages in cramped, unsafe ships. Although many of the settlers did not make the long passage alive, those who did see the shores of North America perceived great opportunities before them. Many of the families that came from England went on to make essential contributions to the emerging nations of Canada and the United States. Research into various historical records revealed some of first members of the Feelix family emigrate to North America: Don Felix who arrived in Baltimore in 1823; Barbara Felix who arrived in Pennsylvania in 1734; Henry Felix who settled in Rhode Island in 1833; HUgo Felix who settled in Texas in 1869.