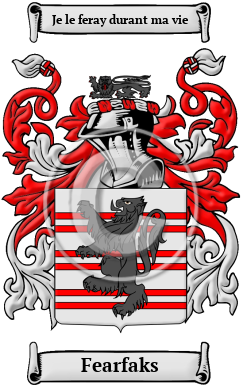 Early Origins of the Fearfaks family

The surname Fearfaks was first found in Northumberland where the name was derived from the Anglo Saxon words foegr and feax which collectively meant "fair-haired." [1] "The true ancient family of Fairfax is supposed to be of Saxon origin, and to have been seated at Torcester in Northumberland a the period of the Conquest." [2] Shirley continues that the Yorkshire branch is perhaps more compelling, "In 1205, Richard Fairfax, the first of the family proved by evidence, was possessed of the lands of Ascahm, not far from the City of York. His grandson purchased the Manor of Walton in the West Riding, which continued for near six hundred years." Fuller in his book "Worthies of England" adds, "in his time [c. 1600-1700], twenty generations of Fairfaxes had resided on one spot, at Walton, co. York." So while there is no doubt the family was originally from Lincolnshire, the Yorkshire branch proves to be the strongest. Another early record points to the string Yorkshire heritage. "Gilling Castle, situated in a fine park on the west of the village [of Gilling], was built by Alan, Earl of Richmond, to repel the frequent attacks of the Saxons and Danes for the recovery of their lost estates; it was afterwards the seat of the Mowbrays, and since the time of Henry VII. has belonged to the family of Fairfax. The church is an ancient edifice with a tower, and contains a vault belonging to the Fairfax family. " [3]

Early History of the Fearfaks family

During the era when a person's name, tribe and posterity was one of his most important possessions, many different spellings were found in the archives examined. Fearfaks occurred in many references, and spelling variations of the name found included Fairfax, Fairfacks, Farefax, Fearfax, Ferfax, Furfax, Furfacks, Farefacks, Fearfacks and many more.

Notable amongst the family name during their early history was Sir Thomas Fairfax (c.1450-1505) a direct ancestor of both Prince William, Duke of Cambridge and The Duchess of Cambridge; Robert Fayrfax (1464-1521), an English Renaissance composer, six masses, two Magnificats, thirteen motets, nine part-songs and two instrumental pieces survive; Thomas Fairfax, 1st Lord Fairfax of Cameron (1560-1640), an English soldier, diplomat and politician; and his half-brother, Edward Fairfax (1580?-1635), an English translator; Henry Fairfax (1588-1665), an English priest and academic from Denton, Yorkshire; Charles Fairfax (1597-1673), an English antiquary and genealogist; Sir William Fairfax (1609-1644), an officer in the Parliamentary army...
Another 101 words (7 lines of text) are included under the topic Early Fearfaks Notables in all our PDF Extended History products and printed products wherever possible.

Migration of the Fearfaks family

Gradually becoming disenchanted with life in Ireland many of these uprooted families sailed aboard the armada of sailing ships known as the "White Sails" which plied the stormy Atlantic. These overcrowded ships often arrived with only 60 to 70% of their original passenger list, many dying of illness and the elements, were buried at sea. In North America, early immigrants bearing the family name Fearfaks, or a spelling variation of the surname include: Lord Fairfax settled in Woodburn Maryland; Nicholas Fairfax settled in Maryland in 1634; William Fairfax (Baron) settled in Virginia in 1626; another William settled in Maryland in 1742.