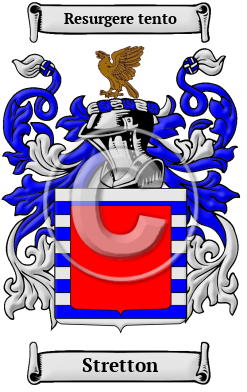 The name Stretton reached English shores for the first time with the ancestors of the Stretton family as they migrated following the Norman Conquest of 1066. The Stretton family lived in Wiltshire, at Stratton. However, there are also parishes in Cornwall, Dorset, Gloucestershire, Norfolk, Buckinghamshire, Hampshire, and Somerset also named Stratton.

The reason for the many parishes so named is because of the etymology of the surname as in "one who came from Stratton (homestead on a Roman road.)" [1] However down in Cornwall, in Cornish the name literally means "the hill full of fresh springs." [2]

Early Origins of the Stretton family

The surname Stretton was first found in Wiltshire where it is said that the notorious Adam de Stratton derives from Argouges from Manche in the arrondisement of Avranches in Normandy.

Adam de Stratton (died 1292) was a royal moneylender, administrator and clergyman under Edward I of England. He rose to become Chamberlain of the Exchequer and steward of Isabella, Countess of Devon. His father was Thomas de Argoges, or Arwillis, of Stratton St Margaret in Wiltshire. In 1278, he was accused of cutting off the seal of a charter from Quarr Abbey, thereby invalidating its authenticity. This was not the beginning nor the last time he would be associated with dubious activities. On 17 January 1290, he was relieved of his office of chamberlain, along with his temporal possessions. Upon his arrest, he was discovered to have in his possession a vast sum of money and objects associated with witchcraft. He was imprisoned in the Tower of London in 1292 and died by 14 August 1294.

Stratton is a parish in Cornwall in the deanery of Trigg-Major, and in the hundred to which this parish imparts its name. "This circumstance denotes its great antiquity, and discovers that in former ages it presented no contemptible figure on the rolls of fame." [3]

Early History of the Stretton family

This web page shows only a small excerpt of our Stretton research. Another 175 words (12 lines of text) covering the years 1285, 1320 and 1364 are included under the topic Early Stretton History in all our PDF Extended History products and printed products wherever possible.

Before the advent of the printing press and the first dictionaries, the English language was not standardized. Sound was what guided spelling in the Middle Ages, so one person's name was often recorded under several variations during a single lifetime. Spelling variations were common, even among the names of the most literate people. Known variations of the Stretton family name include Stratton, Straton, Straiton and others.

More information is included under the topic Early Stretton Notables in all our PDF Extended History products and printed products wherever possible.

Stretton migration to the United States +

To escape the political and religious chaos of this era, thousands of English families began to migrate to the New World in search of land and freedom from religious and political persecution. The passage was expensive and the ships were dark, crowded, and unsafe; however, those who made the voyage safely were encountered opportunities that were not available to them in their homeland. Many of the families that reached the New World at this time went on to make important contributions to the emerging nations of the United States and Canada. Research into various historical records has revealed some of first members of the Stretton family to immigrate North America:

Stretton Settlers in United States in the 17th Century

Stretton Settlers in United States in the 18th Century

Stretton Settlers in Australia in the 19th Century

Stretton Settlers in New Zealand in the 19th Century

Historic Events for the Stretton family +