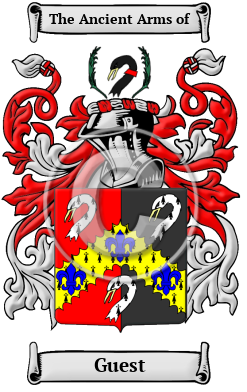 The surname Guest is derived from the Old English word "giest," which in turn comes from the Old Norse Word "gestr," both of which mean "guest" or "stranger." This name was most likely originally a nickname for a guest or stranger, which then became a hereditary surname. [1]

Early Origins of the Guest family

The surname Guest was first found in Worcestershire where Richard Thomas Guest held lands and manors in 1275, as listed in the Subsidy Rolls for that county. [2]

Perhaps the earliest record of the name is of Beowoldus Gest, who lived c.1100 as listed in the book "Old English Bynames." Richard, Thomas le Gest were listed c.1248 and in the Subsidy Rolls for Worcestershire in 1275. [2]

The Hundredorum Rolls of 1273 listed Roger Gest in Wiltshire and Gilbert de Geyste in Norfolk. The Feet of Fines listed Adam le Gest 11, Edward I (during the eleventh year of King Edward I's reign.) [3]

Early History of the Guest family

Spelling variations of this family name include: Gest, Gist, Guest and others.

Distinguished members of the family include Edmuind Guest, Gheast or Geste (1518-1577), Bishop of Salisbury, "born in 1517-18 at Northallerton, Yorkshire. His father, Thomas, belonged to a Worcestershire family, the Gestes of Row Heath in the parish of King's Norton. Edmund was educated at the York grammar school and afterwards at Eton, whence in 1536 he was elected a scholar of King's College, Cambridge. " [5] George Guest (1660-1747), lieutenant-general, was a Yorkshireman of obscure origin. Local antiquaries have discovered no trace of his father. His mother was Mary Guest, afterwards Smith, who was baptised at Halifax, Yorkshire, in April 1640, her...
Another 133 words (10 lines of text) are included under the topic Early Guest Notables in all our PDF Extended History products and printed products wherever possible.

Guest migration to the United States +

Guest Settlers in United States in the 17th Century

Guest Settlers in United States in the 19th Century

Guest Settlers in Australia in the 19th Century

Guest Settlers in New Zealand in the 19th Century

Historic Events for the Guest family +

Suggested Readings for the name Guest +