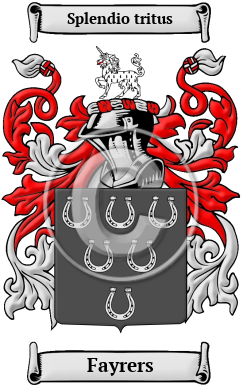 The name Fayrers reached English shores for the first time with the ancestors of the Fayrers family as they migrated following the Norman Conquest of 1066. The Fayrers family lived in Staffordshire. The name, however, derives from the family's place of residence prior to the Norman Conquest of England in 1066, Ferriers, in Gastonois, Normandy. Specifically, the place name comes from "ferrière," which refers to an "iron works." "Many of the coats-armours assigned to the name contain horse-shoes, and at Oakham in Rutlandshire, an ancient barony of the family, a custom prevails to this day of demanding a horse-shoe of every peer of the realm who passes through the town." [1] Another source clarifies that it was Walkelin de Ferrers who started this tradition shortly after he settled there after the Norman Conquest. [2]

Early Origins of the Fayrers family

The surname Fayrers was first found in Staffordshire, where Henry de Fereres of Ferriers-St. Hilaire, Lord of Longueville, Normandy was on record in the Domesday Book of 1086; his castle was at Tutbury, Staffordshire; he had large holdings in Derbyshire, as well as lands in 14 other counties. Other early records include a Henry le Ferrur on record in 1196 in the Curia Regis Rolls for that same county.

"Henry de Ferrers, who accompanied Duke William to England, was son of Walchelin, a Norman knight, and assumed the surname he bore from Ferriers, a small town of Gastinois, celebrated for its iron mines. Hence, too, originated the 'six horse shoes,' the armorial ensigns of the House of Ferrers, allusive to the seigneuris's staple commodity, so essential to the soldier and cavalier in those rude times when war was esteemed the chief business of life, and the adroit management of the steed, even amongst the nobility, the first of accomplishments. The name of Henry de Ferrers occurs in Domesday Book, and from that record he appears to have had vast possessions." [3]

Said to be descendents of Henry de Feriers, the Norman Ferrers family held the earldom of Derby from 1138-1266 and "held 210 lordships in fourteen counties of England, besides the castle and borough of Tutbury, in Staffordshire, the principle seat of the earldom." [4]

However, not all the lordships and manors stayed with the family. "The manor [of Uttoxeter in Staffordshire] was granted by the Conqueror to Henry de Ferrers, Earl of Derby; and was forfeited to the crown, together with the other large estates of that family, by Earl Robert, in the reign of Henry III., and given to Edmund, Earl of Lancaster, the king's second son." [2]

And another example of the family losing an estate: "In the 36th of Henry III. the manor [of Wavertree in Lancashire] was granted to William de Ferrers, Earl of Derby, from whom it reverted to the crown." [2]

And yet another branch of the family were well established at Wirksworth in Derbyshire in ancient times. "In the Domesday book, Wirksworth is described as the property of the king, having a church, a priest, and three leadmines; and it remained in the crown until King John, in the fifth year of his reign, granted it to William de Ferrers, in whose family it continued till the attainder of his descendant, Robert, in the time of Henry III. By this monarch it was given in 1265 to his son, Edmund, Earl of Lancaster, and the manor has since that period constituted a part of the possessions of the duchy of Lancaster." [2]

Early History of the Fayrers family

Anglo-Norman names tend to be marked by an enormous number of spelling variations. This is largely due to the fact that Old and Middle English lacked any spelling rules when Norman French was introduced in the 11th century. The languages of the English courts at that time were French and Latin. These various languages mixed quite freely in the evolving social milieu. The final element of this mix is that medieval scribes spelled words according to their sounds rather than any definite rules, so a name was often spelled in as many different ways as the number of documents it appeared in. The name was spelled Ferrer, Ferrers, Ferers, Feres, Ferris, Ferres, Ferries, Ferras, Farris, Farriss, Faries, de Ferrers, Ferriers and many more.

Migration of the Fayrers family to Ireland

Some of the Fayrers family moved to Ireland, but this topic is not covered in this excerpt.
Another 68 words (5 lines of text) about their life in Ireland is included in all our PDF Extended History products and printed products wherever possible.

Migration of the Fayrers family

Because of the political and religious discontent in England, families began to migrate abroad in enormous numbers. Faced with persecution and starvation at home, the open frontiers and generally less oppressive social environment of the New World seemed tantalizing indeed to many English people. The trip was difficult, and not all made it unscathed, but many of those who did get to Canada and the United States made important contributions to the young nations in which they settled. Some of the first North American settlers with Fayrers name or one of its variants: Henry Ferrers, who arrived in Jamaica in 1675; John Ferrers, who was naturalized in New York in 1797; George Ferrer, who arrived in Maryland in 1774; Anne Ferrers, who arrived in Philadelphia in 1804.