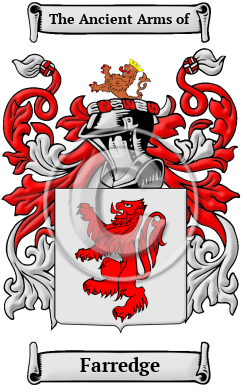 The sea-swept Hebrides islands and the west coast of Scotland, made up the ancient Dalriadan kingdom, the ancestral home of the Farredge family. Their name comes from the Scottish surname MacFergus, which means "son of Fergus", which is in turn derived from the Gaelic personal name "Fearghus," composed of the elements "fear," meaning "man," and "gus," meaning "vigor" or "force." This Gaelic name was found early in both Ireland and Scotland. The name is a cognate of with the Cymric "Gwr-gwst," Old Bret. "Urorgost" and the Pictish word "Forcus." This last Pictish form of the name is found on a monument at St. Vigeans in Angus as "Fercos."

Early Origins of the Farredge family

The surname Farredge was first found in Galloway (Gaelic: Gall-ghaidhealaibh), an area of southwestern Scotland, now part of the Council Area of Dumfries and Galloway, that formerly consisted of the counties of Wigtown (West Galloway) and Kirkcudbright (East Galloway), Ireland where St. Fergus (Fergustian) (circa 730 AD) was an Irish bishop, who went to Scotland as a missionary.

Early History of the Farredge family

This web page shows only a small excerpt of our Farredge research. Another 148 words (11 lines of text) covering the years 1300, 1466, 1499, 1582 and are included under the topic Early Farredge History in all our PDF Extended History products and printed products wherever possible.

Many spelling variations of Farredge have been recorded over the years, including These are the result of the medieval practice of spelling according to sound and repeated translation between Gaelic and English. Fergus, Fergie, Forgie, Forgus, Ferris, Farris and many more.

More information is included under the topic Early Farredge Notables in all our PDF Extended History products and printed products wherever possible.

Migration of the Farredge family to Ireland

Some of the Farredge family moved to Ireland, but this topic is not covered in this excerpt.
Another 70 words (5 lines of text) about their life in Ireland is included in all our PDF Extended History products and printed products wherever possible.

Migration of the Farredge family

Many who arrived from Scotland settled along the east coast of North America in communities that would go on to become the backbones of the young nations of the United States and Canada. In the American War of Independence, many settlers who remained loyal to England went north to Canada as United Empire Loyalists. Their descendants later began to recover the lost Scottish heritage through events such as the highland games that dot North America in the summer months. Research into various historical records revealed some of first members of the Farredge family emigrate to North America: Owen Fergus, who settled in Boston in 1739; James Fergus, who arrived in North Carolina in 1740; another James Fergus, who settled in New York in 1774.