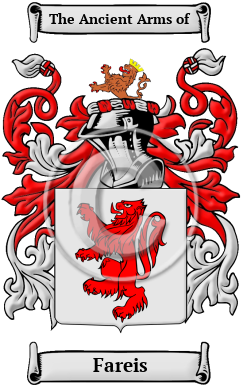 The age-old Hebrides islands and the west coast of Scotland are the ancestral home of the Fareis family. Their name comes from the Scottish surname MacFergus, which means "son of Fergus", which is in turn derived from the Gaelic personal name "Fearghus," composed of the elements "fear," meaning "man," and "gus," meaning "vigor" or "force." This Gaelic name was found early in both Ireland and Scotland. The name is a cognate of with the Cymric "Gwr-gwst," Old Bret. "Urorgost" and the Pictish word "Forcus." This last Pictish form of the name is found on a monument at St. Vigeans in Angus as "Fercos."

Early Origins of the Fareis family

The surname Fareis was first found in Galloway (Gaelic: Gall-ghaidhealaibh), an area of southwestern Scotland, now part of the Council Area of Dumfries and Galloway, that formerly consisted of the counties of Wigtown (West Galloway) and Kirkcudbright (East Galloway), Ireland where St. Fergus (Fergustian) (circa 730 AD) was an Irish bishop, who went to Scotland as a missionary.

Early History of the Fareis family

This web page shows only a small excerpt of our Fareis research. Another 148 words (11 lines of text) covering the years 1300, 1466, 1499, 1582 and are included under the topic Early Fareis History in all our PDF Extended History products and printed products wherever possible.

Medieval spelling was at best an intuitive process, and translation between Gaelic and English was no more effective. These factors caused an enormous number of spelling variations in Dalriadan names. In fact, it was not uncommon to see a father and son who spelled their name differently. Over the years, Fareis has been spelled Fergus, Fergie, Forgie, Forgus, Ferris, Farris and many more.

More information is included under the topic Early Fareis Notables in all our PDF Extended History products and printed products wherever possible.

Migration of the Fareis family to Ireland

Some of the Fareis family moved to Ireland, but this topic is not covered in this excerpt.
Another 70 words (5 lines of text) about their life in Ireland is included in all our PDF Extended History products and printed products wherever possible.

Migration of the Fareis family

Scottish settlers arrived in many of the communities that became the backbones of the United States and Canada. Many stayed, but some headed west for the endless open country of the prairies. In the American War of Independence, many Scots who remained loyal to England re-settled in Canada as United Empire Loyalists. Scots across North America were able to recover much of their lost heritage in the 20th century as Clan societies and highland games sprang up across North America. Early immigration and passenger lists have documented some of the first Fareiss to arrive on North American shores: Owen Fergus, who settled in Boston in 1739; James Fergus, who arrived in North Carolina in 1740; another James Fergus, who settled in New York in 1774.