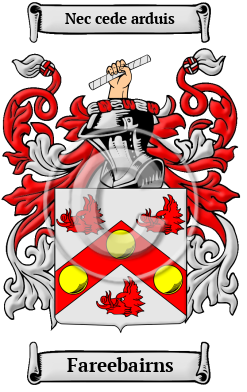 The ancient history of the name Fareebairns dates back to the days of the Anglo-Saxon tribes of Britain. It was a name given to a person with attractive, youthful looks, or someone who was noted as having been a beautiful child. The surname Fareebairns is derived from the Old English words fair, which means lovely, and bearn, which means child.

However, the name Fareebairns may also be a local surname applied to someone from the settlement of Fairbourne in Kent or Fairburn in the West Riding of Yorkshire. In this case, Fareebairns belongs to the large category of Anglo-Saxon habitation names, which are derived from pre-existing names for towns, villages, parishes, or farmsteads.

Early Origins of the Fareebairns family

The surname Fareebairns was first found in North Yorkshire at Fairburn, a small village and civil parish in the Selby district that dates back to before the Domesday Book when it was listed as Fareburne c. 1030. A few years later in 1086, the Domesday Book lists the placename as Fareburne [1] and literally meant "stream where ferns grow," having derived from the Old English fearn + burna. [2]

Early History of the Fareebairns family

Until quite recently, the English language has lacked a definite system of spelling rules. Consequently, Anglo-Saxon surnames are characterized by a multitude of spelling variations. Changes in Anglo-Saxon names were influenced by the evolution of the English language, as it incorporated elements of French, Latin, and other languages. Although Medieval scribes and church officials recorded names as they sounded, so it is common to find one person referred to by several different spellings of his surname, even the most literate people varied the spelling of their own names. Variations of the name Fareebairns include Fairbairn, Fairbairns, Fairbarn, Fairborn, Fairborne and many more.

Notables of the family at this time include Sir Andrew Fairbairn; and Sir Palmes Fairborne (1644-1680), an English soldier and Governor of Tangier. He was "the son of Colonel Stafford Fairborne of Newark, and probably related to the Yorkshire family of that name." [7] Sir Stafford Fairborne (d. 1742), was Admiral of the fleet and the eldest son of Sir Palmes Fairborne. "In June 1685 Stafford was lieutenant of the Bonadventure at Tangiers, and during the illness of his captain commanded the ship in a successful encounter with some Sallee vessels at Mamora. On 12 July 1686 he was...
Another 98 words (7 lines of text) are included under the topic Early Fareebairns Notables in all our PDF Extended History products and printed products wherever possible.

Migration of the Fareebairns family

Searching for a better life, many English families migrated to British colonies. Unfortunately, the majority of them traveled under extremely harsh conditions: overcrowding on the ships caused the majority of the immigrants to arrive diseased, famished, and destitute from the long journey across the ocean. For those families that arrived safely, modest prosperity was attainable, and many went on to make invaluable contributions to the development of the cultures of the new colonies. Research into the origins of individual families in North America revealed records of the immigration of a number of people bearing the name Fareebairns or a variant listed above: Robert Fairbarn landed in 1763. William Fairbarn joined many of his fellow Fairbarns when he purchased land in Philadelphia in 1835.