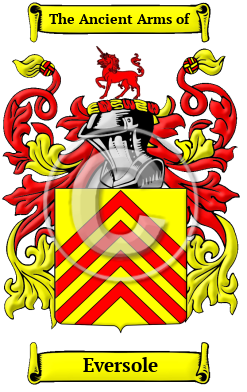 The history of the Eversole name began with the ancient Anglo-Saxon tribes of Britain. The name is derived from the personal names Evot or Everard. The surname Eversole features the common suffix -son, which superseded all other patronymic suffixes as the dominant form during the 14th century and was most common in the north of England.

Early Origins of the Eversole family

The surname Eversole was first found in Yorkshire where the first record of the family was William Evoteson who was listed there in 1325. [1]

John of Eversden or Everisden ( fl. 1300), was an early English chronicler, "presumably a native of one of the two villages of the name near Caxton, Cambridgeshire. He entered the Benedictine order, having been tonsured in 1255, and became a member of the abbey of Bury St. Edmunds. He was cellarer there in 1300, when he made a 'valida expeditio' into Northamptonshire to carry out a claim of his monastery on the manor of Werketon." [2]

Early History of the Eversole family

This web page shows only a small excerpt of our Eversole research. Another 67 words (5 lines of text) are included under the topic Early Eversole History in all our PDF Extended History products and printed products wherever possible.

Sound was what guided spelling in the essentially pre-literate Middle Ages, so one person's name was often recorded under several variations during a single lifetime. Also, before the advent of the printing press and the first dictionaries, the English language was not standardized. Therefore, spelling variations were common, even among the names of the most literate people. Known variations of the Eversole family name include Everson, Eversen and others.

More information is included under the topic Early Eversole Notables in all our PDF Extended History products and printed products wherever possible.

In the United States, the name Eversole is the 7,094th most popular surname with an estimated 4,974 people with that name. [4]

Migration of the Eversole family

For political, religious, and economic reasons, thousands of English families boarded ships for Ireland, the Canadas, the America colonies, and many of smaller tropical colonies in the hope of finding better lives abroad. Although the passage on the cramped, dank ships caused many to arrive in the New World diseased and starving, those families that survived the trip often went on to make valuable contributions to those new societies to which they arrived. Early immigrants bearing the Eversole surname or a spelling variation of the name include : Captain Everson who settled in Boston in 1763; Matthew Everson settled in Virginia in 1653; Barnt Eversen settled in New York in 1658; Martin Eversen settled in Georgia in 1734..

Historic Events for the Eversole family +