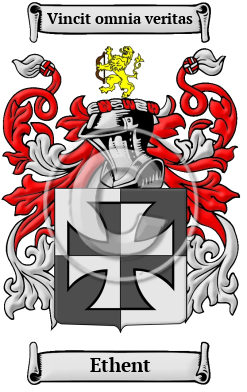 The ancient history of the Ethent name begins with the ancient Anglo-Saxon tribes of Britain. The name is derived from when the family resided on a farm by a river or a farm on an island. [1] The surname Ethent originally derived from the Old English word Eatun which referred to farm on a river or island. The surname Ethent is a topographic surname, which was given to a person who resided near a physical feature such as a hill, stream, church, or type of tree. Habitation names form the other broad category of surnames that were derived from place-names. They were derived from pre-existing names for towns, villages, parishes, or farmsteads. Other local names are derived from the names of houses, manors, estates, regions, and entire counties. As a general rule, the greater the distance between an individual and their homeland, the larger the territory they were named after. For example, a person who only moved to another parish would be known by the name of their original village, while people who migrated to a different country were often known by the name of a region or country from which they came.

Early Origins of the Ethent family

The surname Ethent was first found in various townships named "Eaton," throughout Britain including those in Berkshire, Cheshire, Derbyshire, Nottinghamshire, Salop, Herefordshire, Bedfordshire and more. Many of the villages and parishes date back to the Domesday Book of 1086 including: Castle Eaton, Wiltshire; Eaton, Norfolk; Eaton, Oxfordshire; Eaton Socon, Cambridgeshire and Eaton Bray in Bedfordshire. [1]

Early History of the Ethent family

Until quite recently, the English language has lacked a definite system of spelling rules. Consequently, Anglo-Saxon surnames are characterized by a multitude of spelling variations. Changes in Anglo-Saxon names were influenced by the evolution of the English language, as it incorporated elements of French, Latin, and other languages. Although Medieval scribes and church officials recorded names as they sounded, so it is common to find one person referred to by several different spellings of his surname, even the most literate people varied the spelling of their own names. Variations of the name Ethent include Eaton, Eton, Eaten and others.

Notables of the family at this time include Samuel Eaton (ca.1596-1665), an English independent divine; Theophilus Eaton (c.1590-1658), a merchant, farmer, and Puritan colonial leader who was the co-founder and first governor of New Haven Colony, Connecticut; Nathaniel Eaton (1610-1674) English settler Massachusetts Bay Colony (c. 1634), the first schoolmaster of Harvard College in Cambridge, Massachusetts; and...
Another 57 words (4 lines of text) are included under the topic Early Ethent Notables in all our PDF Extended History products and printed products wherever possible.

Migration of the Ethent family to Ireland

Some of the Ethent family moved to Ireland, but this topic is not covered in this excerpt.
Another 82 words (6 lines of text) about their life in Ireland is included in all our PDF Extended History products and printed products wherever possible.

Migration of the Ethent family

Searching for a better life, many English families migrated to British colonies. Unfortunately, the majority of them traveled under extremely harsh conditions: overcrowding on the ships caused the majority of the immigrants to arrive diseased, famished, and destitute from the long journey across the ocean. For those families that arrived safely, modest prosperity was attainable, and many went on to make invaluable contributions to the development of the cultures of the new colonies. Research into the origins of individual families in North America revealed records of the immigration of a number of people bearing the name Ethent or a variant listed above: Alexander Eaton who settled in Boston Massachusetts in 1651; Eliza Eaton settled in Pennsylvania in 1682; Francis Eaton, his wife Sarah, and son Samuel, arrived on the &quot.