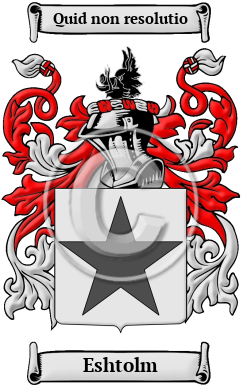 The ancient roots of the Eshtolm family name are in the Anglo-Saxon culture. The name Eshtolm comes from when the family lived in the village of Ashton, Lancashire. The first part of the name, Ash, was originally given to a person who resided in an area where ash trees prospered. There are eighteen parishes and townships called Ashton in numerous counties and there are also various minor localities of this same name.

Early Origins of the Eshtolm family

The surname Eshtolm was first found in Lancashire, where they held a family seat originally at Assheton, originally known as Assheton-under-Lyne. [1]

The manor of Middleton has an extensive history dating back to the de Lacy family. It passed through Thomas Plantagenet and then "it would appear that the manor subsequently passed to the Kydales and the Bartons; and by the marriage of Sir Ralph Assheton, commonly called the "Black Knight of Ashton," with the last heiress of the Bartons, it was conveyed to the Assheton family.

Sir John de Ashton (fl. 1370), was a military commander, the son of Thomas de Ashton, who had distinguished himself at the battle of Nevill's Cross. His son, Sir John de Ashton (d. 1428), was Seneschal of Bayeux. "He was one of forty-six esquires who were summoned to attend the grand coronation of Henry IV, in honour of which event they were solemnly admitted to the order of the Bath. He served in the parliament of 1413 as knight of the shire for Lancashire. " [3]

Early History of the Eshtolm family

One relatively recent invention that did much to standardize English spelling was the printing press. However, before its invention even the most literate people recorded their names according to sound rather than spelling. The spelling variations under which the name Eshtolm has appeared include Ashton, Asshton, Asheton, Ashtown, Assheton, Ascheton and many more.

Migration of the Eshtolm family

At this time, the shores of the New World beckoned many English families that felt that the social climate in England was oppressive and lacked opportunity for change. Thousands left England at great expense in ships that were overcrowded and full of disease. A great portion of these settlers never survived the journey and even a greater number arrived sick, starving, and without a penny. The survivors, however, were often greeted with greater opportunity than they could have experienced back home. These English settlers made significant contributions to those colonies that would eventually become the United States and Canada. An examination of early immigration records and passenger ship lists revealed that people bearing the name Eshtolm arrived in North America very early: Alice Ashton, who sailed to Virginia in 1635. John Ashton arrived in Virginia in 1720; James Ashton sailed to Philadelphia in 1816; and Evan Ashton journeyed to San Francisco in 1852..