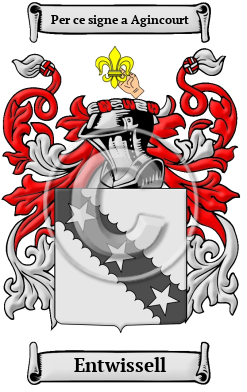 The ancient roots of the Entwissell family name are in the Anglo-Saxon culture. The name Entwissell comes from when the family lived in Entwistle, a township in the parish of Bolton, Lancashire.

Early Origins of the Entwissell family

The surname Entwissell was first found in Lancashire at Entwistle, a township, in the chapelry of Turton, parish and union of Bolton, hundred of Salford.

"The township was anciently common land, belonging to the families of Blackburn and Entwistle. The latter family was long settled here, and Camden speaks of Entwistle Hall, in his time, as being "a neat and elegant mansion, the residence of noble proprietors of its own name. [1]

"Sir Bertine Entwistle, knight, viscount, and Baron, of Bricqbec, in Normandy, a distinguished warrior in the reigns of Henry V. and VI., was among the heroes of Agincourt, and contributed by his zeal to the conquest of France. He was also engaged, on the side of the latter monarch, in the battle of St. Alban's, the first blow struck in the fatal quarrel between the houses of York and Lancaster, in 1455; and there unfortunately perished." [1]

Wardleworth in Lancashire was home to a branch of the family. "Foxholes, in the township, has long been the seat of the Entwistles, a distinguished Lancashire family, of whom was Sir Bertyne Entwistle, one of the heroes of Agincourt. The original mansion was built by Edmund Entwistle soon after the Reformation." [1]

Early History of the Entwissell family

This web page shows only a small excerpt of our Entwissell research. Another 96 words (7 lines of text) covering the years 1550, 1582, 1574 and 1620 are included under the topic Early Entwissell History in all our PDF Extended History products and printed products wherever possible.

One relatively recent invention that did much to standardize English spelling was the printing press. However, before its invention even the most literate people recorded their names according to sound rather than spelling. The spelling variations under which the name Entwissell has appeared include Entwistle, Entwisell, Entwissell, Entwhistle and many more.

More information is included under the topic Early Entwissell Notables in all our PDF Extended History products and printed products wherever possible.

Migration of the Entwissell family

At this time, the shores of the New World beckoned many English families that felt that the social climate in England was oppressive and lacked opportunity for change. Thousands left England at great expense in ships that were overcrowded and full of disease. A great portion of these settlers never survived the journey and even a greater number arrived sick, starving, and without a penny. The survivors, however, were often greeted with greater opportunity than they could have experienced back home. These English settlers made significant contributions to those colonies that would eventually become the United States and Canada. An examination of early immigration records and passenger ship lists revealed that people bearing the name Entwissell arrived in North America very early: James and Rose Entwhistle arrived in Philadelphia in 1830; James Entwisle arrived in New York in 1820; Isaac, John and James Entwisle arrived in Philadelphia in 1844.

Motto: Per ce signe a Agincourt
Motto Translation: Through this sign, we have Agincourt