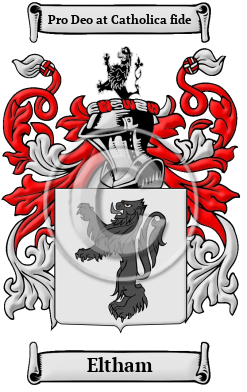 Early Origins of the Eltham family

The surname Eltham was first found in Lancashire where one of the first record of the name was found in 1246 when Adam de Eluetham held estates in what is now known as Altham in Whalley in that shire. Eltham in Kent was an ancient family seat. "This place, in Domesday Book called Alteham, is supposed to have derived its name from the Saxon, Eald, old, and Ham, a dwelling. It formed part of the royal demesnes in the reign of Edward the Elder, by whom it was given to Odo, Archbishop of Canterbury; and at a very early period became a favourite retreat of the English kings." [1]

A few years later, John of Eltham, 1st Earl of Cornwall (1316-1336) born at Eltham Palace, Kent, was the second son of king Edward II of England and his queen Isabella of France, heir to the English throne. "Edward II. resided here for some time, and at this place also his son was born, from this circumstance called John of Eltham, and the palace, erroneously, King John's Palace." [1] He was buried with full honors at Westminster Abbey in January 1337.

Early History of the Eltham family

Before the last few hundred years, the English language had no fast system of spelling rules. For that reason, spelling variations are commonly found in early Anglo-Saxon surnames. Over the years, many variations of the name Eltham were recorded, including Altham, Aletham, Althem, Althum, Allthem, Alltham, Eltham and many more.

Distinguished members of the family include Agnes of Eltham (1498-1530), an English noblewoman who was an orphan and ward of Dartford Priory in Dartford, Kent who married Adam Langstroth, the head of a landed family in Yorkshire with 'a considerable dowry'. Sir James Altham (d. 1617), was an English judge, descended from Christopher Altham of Girlington, in the West Riding of Yorkshire, the third son of...
Another 65 words (5 lines of text) are included under the topic Early Eltham Notables in all our PDF Extended History products and printed products wherever possible.

Eltham migration to the United States +

To escape oppression and starvation at that time, many English families left for the "open frontiers" of the New World with all its perceived opportunities. In droves people migrated to the many British colonies, those in North America in particular, paying high rates for passages in cramped, unsafe ships. Although many of the settlers did not make the long passage alive, those who did see the shores of North America perceived great opportunities before them. Many of the families that came from England went on to make essential contributions to the emerging nations of Canada and the United States. Research into various historical records revealed some of first members of the Eltham family emigrate to North America:

Eltham Settlers in United States in the 18th Century