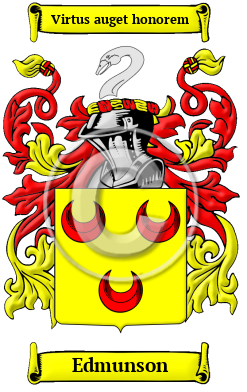 The Scottish/English Borderlands and their proud Boernician clans are the ancestral home of the Edmunson family. Their name is derived from the personal name Edmond. Edmunson is a patronymic surname, which belongs to the category of hereditary surnames. Many patronyms were formed by a son using his father's personal name as a surname. Others were taken from the names of important religious and secular figures. Members of the Edmunson family settled in Scotland, just following the Norman Conquest of England, in 1066.

Early Origins of the Edmunson family

The surname Edmunson was first found in Edinburghshire, a former county, now part of the Midlothian council area where they held a family seat from very early times and were granted lands by Queen Margaret of Scotland. They take their name from the place name Edmondstone, the tun of Eadmund, near Edinburgh. The name may have been derived from Aedmund filius Forn, one of the witnesses to a charter by Thor filius Swani (c. 1150)[1]

Early History of the Edmunson family

In the Middles Ages scribes spelled names by their sound. Often a name was written under a different spelling variation each time it was recorded. Edmunson has appeared as Edmondson, Edmonson, Edminson, Edminston, Edmiston, Edmeston, Edmondon and many more.

Notable among the family at this time was Henry Edmondson (1607-1659), an English schoolmaster, entered Queen's College, Oxford in 1622 aged 15. William Edmundson (1627-1712), was an English Quaker whose father was a wealthy yeoman, was born...
Another 36 words (3 lines of text) are included under the topic Early Edmunson Notables in all our PDF Extended History products and printed products wherever possible.

Migration of the Edmunson family to Ireland

Some of the Edmunson family moved to Ireland, but this topic is not covered in this excerpt.
Another 91 words (6 lines of text) about their life in Ireland is included in all our PDF Extended History products and printed products wherever possible.

Migration of the Edmunson family

The ancestors of Boernician-Scottish settlers dot North America even today. They settled all along the east coast when they came over, but some went north as United Empire Loyalists at the time of the War of Independence. However, these strong lines endured as Scottish families in the United States and Canada have rediscovered much of the heritage that was taken from them centuries ago. Some of the first immigrants to cross the Atlantic and come to North America carried the name Edmunson, or a variant listed above: Francis Edmonson arrived in Philadelphia in 1796; followed by George Edmonson in 1856; Robert Edmonton arrived in Philadelphia in 1853.