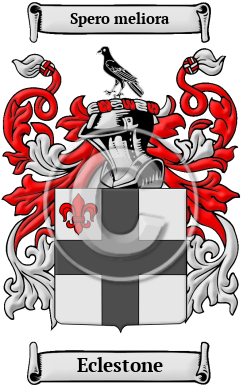 The origins of the Eclestone name lie with England's ancient Anglo-Saxon culture. It comes from when the family lived in a region named Eccleston in Lancashire and Chester. The surname Eclestone is a topographic surname, which was given to a person who resided near a physical feature such as a hill, stream, church, or type of tree. Habitation names form the other broad category of surnames that were derived from place-names. They were derived from pre-existing names for towns, villages, parishes, or farmsteads. Other local names are derived from the names of houses, manors, estates, regions, and entire counties. As a general rule, the greater the distance between an individual and their homeland, the larger the territory they were named after. For example, a person who only moved to another parish would be known by the name of their original village, while people who migrated to a different country were often known by the name of a region or country from which they came.

Early Origins of the Eclestone family

The surname Eclestone was first found in Lancashire at Eccleston, a village and civil parish of the Borough of Chorley. This place gave name to a family as early as the reign of Richard I. Alan de Eccleston was listed as a tenant of Edward III and his pedigree ascends to the time of Henry III. This township is probably the Eglestun of Domesday Book of 1086. [1]

Another early record of the surname was Thomas of Eccleston ( fl. 1250), a thirteenth century English Franciscan chronicler, best known for his "De Adventu Fratrum Minorum in Angliam." It tells the story of when Franciscan friars first came to England in 1224 to about 1258. He was known as "Brother Thomas" and was later given the title "of Eccleston." [2]

Early History of the Eclestone family

Before the last few hundred years, the English language had no fast system of spelling rules. For that reason, spelling variations are commonly found in early Anglo-Saxon surnames. Over the years, many variations of the name Eclestone were recorded, including Eccleston, Ecclestone, Eccleton and others.

Notables of this surname at this time include: Thomas Eccleston (1659-1743), an English Jesuit of Eccleston Hall, Lancashire. He was the only son of Henry Eccleston, esq., of Eccleston Hall, Lancashire. "During the wars in Ireland, after the revolution of 1688, he held a captain's commission in King James's army. Being engaged in a duel which proved fatal to his antagonist, he was seized with remorse and determined to enter the religious state. Accordingly he returned to Rome, entered the jesuit novitiate of Sant' Andrea...
Another 84 words (6 lines of text) are included under the topic Early Eclestone Notables in all our PDF Extended History products and printed products wherever possible.

Migration of the Eclestone family to Ireland

Some of the Eclestone family moved to Ireland, but this topic is not covered in this excerpt. More information about their life in Ireland is included in all our PDF Extended History products and printed products wherever possible.

Migration of the Eclestone family

To escape oppression and starvation at that time, many English families left for the "open frontiers" of the New World with all its perceived opportunities. In droves people migrated to the many British colonies, those in North America in particular, paying high rates for passages in cramped, unsafe ships. Although many of the settlers did not make the long passage alive, those who did see the shores of North America perceived great opportunities before them. Many of the families that came from England went on to make essential contributions to the emerging nations of Canada and the United States. Research into various historical records revealed some of first members of the Eclestone family emigrate to North America: Elizabeth Eccleston who settled in New England in 1706; E. Eccleston arrived in New York in 1823; James and Henry Eccleston arrived in Philadelphia in 1860..