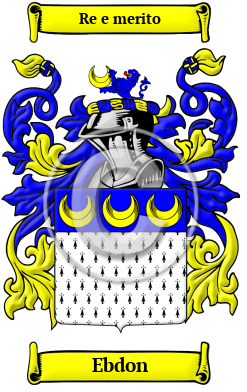 The Ebdon surname is thought to be derived from one of several place names in West Yorkshire. The place names come from the Old English "heope," or "(rose) hip," and "denu," which meant "valley." [1]

Early Origins of the Ebdon family

The surname Ebdon was first found in the West Riding of Yorkshire at Hebden, a township, in the parish of Linton, union of Skipton, E. division of the wapentake of Staincliffe and Ewcross. [2] [3] This township dates back to the Domesday Book where it was recorded as Hebedene. [4]

In the same West Riding, the village of Hebden Bridge which "derives its name from the river Hebden, which divides the village into two portions, communicating with each other by two neat bridges." [2] The first record for this village was in 1399 when it was recorded as Hepdenbryge. [1]

In 1120 the manor of Hebden was granted by Roger de Mowbray to Uctred de Hebden, who was a descendant of Uctred, Earl of Northumberland. The Curia Regis Rolls of 1208 lists Elias de Heppedon in 1208 and later the Feet of Fines for Yorkshire lists William de Hebbeden in 1312. [5]

The Yorkshire Poll Tax Rolls of 1379 include Dionisius de Hebdeyn, and Adam de Hebden, Salter, was listed as a Freemen of York, 1 Edward III (during the first year of the reign of Edward III. [6]

"The Hebdens, who derive their name from more than one West Riding village, are probably for the most part descended from an ancient gentle family of Ripon during the 15th, 16th, and 17th centuries, where they frequently filled the office of wakeman and afterwards of mayor. William de Hebden was rector of Burnsall in the reign of Edward III. Baker Hebdon was warden of Hull in 1761 (Tickell's "Hull"). The Hebdens are now numerous in the district of Bedale, and they are still represented in Ripon." [7]

Further to the north in Scotland, "a family of this name possessed the island of Eday, Orkney, in the nineteenth century. [The family was] probably from one or other of the villages of the name in the West Riding of Yorkshire. William de Hebden was rector of Burnsall, Yorkshire, in the reign of Edward III." [8]

Early History of the Ebdon family

It is only in the last few hundred years that the English language has been standardized. For that reason, early Anglo-Saxon surnames like Ebdon are characterized by many spelling variations. As the English language changed and incorporated elements of other European languages, even literate people changed the spelling of their names. Scribes and monks in the Middle Ages spelled names they sounded, so it is common to find several variations that refer to a single person. The variations of the name Ebdon include: Hebden, Hebdon, Heberden, Hepden, Habton, Habdon, Hibdon, Hibden, Ebdon and many more.

Distinguished members of the family include William Hebden, Rector of Burnsall, Sir John Hebden, a Russian merchant agent for Tsar Alexis embassy to Russia for Charles II; and his son, Sir John Hebdon (1612-1670.) His father is buried at Lower Tooting in Surrey. [2] Thomas Ebdon was born at Durham in 1738. It is presumed from the circumstance of the name and date 'T. Ebdon, 1755,' still remaining, carved...
Another 68 words (5 lines of text) are included under the topic Early Ebdon Notables in all our PDF Extended History products and printed products wherever possible.

Ebdon migration to the United States +

Many English families tired of political and religious strife left Britain for the new colonies in North America. Although the trip itself offered no relief - conditions on the ships were extremely cramped, and many travelers arrived diseased, starving, and destitute - these immigrants believed the opportunities that awaited them were worth the risks. Once in the colonies, many of the families did indeed prosper and, in turn, made significant contributions to the culture and economies of the growing colonies. An inquiry into the early roots of North American families has revealed a number of immigrants bearing the name Ebdon or a variant listed above:

Ebdon Settlers in United States in the 18th Century

Ebdon Settlers in New Zealand in the 19th Century