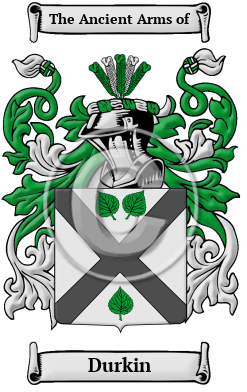 The Durkin surname is an Anglicized form of the Gaelic Mac Duarcáin.

Early Origins of the Durkin family

The surname Durkin was first found in north Connacht (Irish: Connachta, (land of the) descendants of Conn), where they held a family seat as Chiefs of their race. Irish history was greatly influenced by the Norman invasion of 1172, and thereafter, the surnames of Irish Gaelic clanns and septs and many of the Norman families became almost indistinguishable. This family name was found later in Sligo where seated and represented the first recorded reference to the name by Sineall, son of Cassan. They were descended through the MacNamara line from the O'Brien Kings of Ireland.

Early History of the Durkin family

This web page shows only a small excerpt of our Durkin research. Another 75 words (5 lines of text) are included under the topic Early Durkin History in all our PDF Extended History products and printed products wherever possible.

More information is included under the topic Early Durkin Notables in all our PDF Extended History products and printed products wherever possible.

In the United States, the name Durkin is the 4,580th most popular surname with an estimated 7,461 people with that name. [1]

Durkin migration to the United States +

Durkin Settlers in United States in the 17th Century

Durkin Settlers in United States in the 19th Century

Durkin Settlers in Canada in the 19th Century

Durkin Settlers in Australia in the 19th Century

Historic Events for the Durkin family +