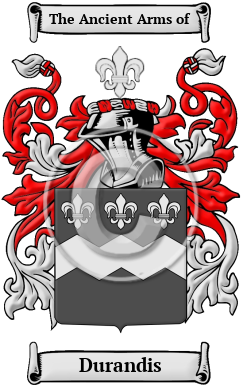 The distinguished surname Durandis was first brought to England in the wake of the Norman Conquest of 1066. The name is patronymic in origin, signifying "the son of Durant," an Old French personal name. Looking at records from this time, we found Geoffry, Roger and Henry Durant who claimed descent from Normandy c. 1180-95 [1] while another census in 1198, lists Aceline, Ralph, Richard, and Robert Durant. [2]

Early Origins of the Durandis family

The surname Durandis was first found in Warwickshire, Worcestershire, and Shropshire at Tong, a parish, in the union of Shiffnall, Shiffnall division of the hundred of Brimstree. "Tong Castle, the seat of the family of Durant, a magnificent mansion remodelled in the last century, is crowned with numerous turrets, pinnacles, and eight lofty domes, producing a striking effect: it contains many valuable pictures and cabinets." [3]

Early History of the Durandis family

This web page shows only a small excerpt of our Durandis research. Another 111 words (8 lines of text) covering the years 1140, 1296, 1578, 1564, 1660 and 1644 are included under the topic Early Durandis History in all our PDF Extended History products and printed products wherever possible.

Anglo-Norman names tend to be marked by an enormous number of spelling variations. This is largely due to the fact that Old and Middle English lacked any spelling rules when Norman French was introduced in the 11th century. The languages of the English courts at that time were French and Latin. These various languages mixed quite freely in the evolving social milieu. The final element of this mix is that medieval scribes spelled words according to their sounds rather than any definite rules, so a name was often spelled in as many different ways as the number of documents it appeared in. The name was spelled Durand, Durant, Durande, Durrane, Dant, Dante and many more.

Outstanding amongst the family at this time was Thomas Drant (d. 1578?), English divine and poet, born at Hagworthingham in Lincolnshire, son of Thomas Drant. "On the occasion of Queen Elizabeth's visit to the university in August 1564 he composed copies of English, Latin, and Greek verses, which he presented to her majesty. " [6] John Durnat...
Another 55 words (4 lines of text) are included under the topic Early Durandis Notables in all our PDF Extended History products and printed products wherever possible.

Migration of the Durandis family

Because of the political and religious discontent in England, families began to migrate abroad in enormous numbers. Faced with persecution and starvation at home, the open frontiers and generally less oppressive social environment of the New World seemed tantalizing indeed to many English people. The trip was difficult, and not all made it unscathed, but many of those who did get to Canada and the United States made important contributions to the young nations in which they settled. Some of the first North American settlers with Durandis name or one of its variants: William Durand, who settled in Virginia in 1635; George Durant, who came to North Carolina in 1661; Thomas Dant, who immigrated to Maryland in 1674; Thomas Durrant, who arrived with his wife and servants in Barbados in 1680.