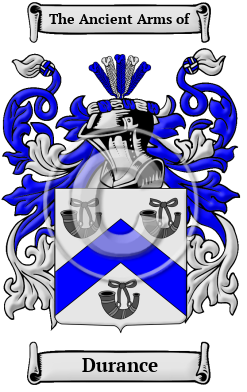 Though shrouded by the mists of time, the chronicles of Scotland reveal the early records of the Norman surname Durance which ranks as one of the oldest. The history of the name is interwoven within the colorful plaid of Scottish history and is an intrinsic part of the heritage of Scotland.

Early Origins of the Durance family

The surname Durance was first found in Warwickshire, Worcestershire, and Salop, where they held a family seat from very early times and were granted lands by Duke William of Normandy, their liege Lord, for their distinguished assistance at the Battle of Hastings in 1066 A.D.

Early History of the Durance family

This web page shows only a small excerpt of our Durance research. Another 111 words (8 lines of text) covering the years 1140, 1296, 1632 and 1692 are included under the topic Early Durance History in all our PDF Extended History products and printed products wherever possible.

Spelling variations of this family name include: Durand, Durant, Durande, Durrane and others.

Another 41 words (3 lines of text) are included under the topic Early Durance Notables in all our PDF Extended History products and printed products wherever possible.

Migration of the Durance family

Some of the first settlers of this family name or some of its variants were: William Durand who settled in Virginia in 1635; Thomas Durrant settled in Maryland in 1774; Thomas Durrant arrived with his wife and servants in Barbados in 1680..