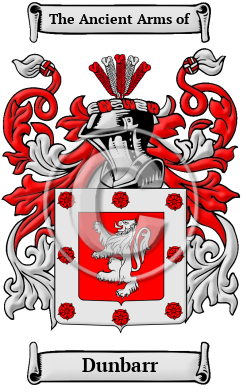 The Dunbarr surname is derived from the name of the Barony of Dunbar on the North Sea coast near Edinburgh. The place name comes from the Gaelic words "dùn," meaning "a fort," and "barr," meaning "top," or "summit."

Early Origins of the Dunbarr family

The surname Dunbarr was first found in the barony of Dunbar in the Lothians where they held a family seat from very ancient times; ever since the 11th century, when Cospatrick was deprived of his Earldom of Northumberland by William the Conqueror, and fled to Scotland. There he was granted the lands of Dunbar and Lothian, Cumnock in Ayrshire, and Mochrum in Wigtown by Malcolm Ceanmore, the King of Scotland. Traditionally, the family descend from Crinan of Dunkeld, the Earl of Northumberland, ancestor of both King Duncan I (d. 1040) and the Earls Gospatrick, who were the later the Earls of March. Of this line, Patrick V, Earl of March (c.1285-1369) gave English King Edward II sanctuary at the fortress of Dunbar Castle following the Battle of Bannockburn. He was one of the Scottish nobles, who signed, the declaration of Scottish independence to the Pope dated at Arbroath on 6 April 1320. He was married to the infamous "Black Agnes," (Agnes Dunbar, 4th Countess of Moray), "that brawling boisterous Scottish wench" as an English balladeer had called her. In the Earl's absence, she held Dunbar castle for several months before succumbing to the overwhelming English army in 1337.

Early History of the Dunbarr family

This web page shows only a small excerpt of our Dunbarr research. Another 174 words (12 lines of text) covering the years 1291, 1320, 1435, 1465, 1530, 1797 and are included under the topic Early Dunbarr History in all our PDF Extended History products and printed products wherever possible.

More information is included under the topic Early Dunbarr Notables in all our PDF Extended History products and printed products wherever possible.

Migration of the Dunbarr family to Ireland

Some of the Dunbarr family moved to Ireland, but this topic is not covered in this excerpt.
Another 81 words (6 lines of text) about their life in Ireland is included in all our PDF Extended History products and printed products wherever possible.

Dunbarr migration to the United States +

Dunbarr Settlers in United States in the 17th Century

Dunbarr Settlers in United States in the 18th Century

Dunbarr Settlers in West Indies in the 17th Century