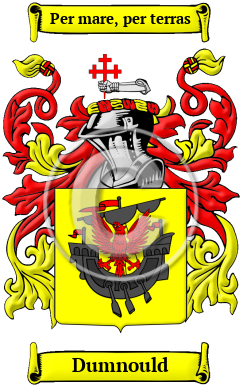 The sea-swept Hebrides islands and the west coast of Scotland are the ancestral home of the Dumnould family. Their name comes from a powerful ruler. The name Donald is derived from the Gaelic name Domhnull, or MacDhomhnuill, and the Celtic name Dubnovalos, all of which mean "world ruler" or "world-mighty". The name ranks second only to John in its popularity as a personal name in Scotland.

Early Origins of the Dumnould family

The surname Dumnould was first found in Galloway (Gaelic: Gall-ghaidhealaibh), an area of southwestern Scotland, now part of the Council Area of Dumfries and Galloway, that formerly consisted of the counties of Wigtown (West Galloway) and Kirkcudbright (East Galloway), where they held a family seat from very ancient times, some say well before the Norman Conquest and the arrival of Duke William at Hastings in 1066 A.D.

Early History of the Dumnould family

This web page shows only a small excerpt of our Dumnould research. Another 167 words (12 lines of text) covering the years 1703, 1780, 1703, 1713, 1620, 1575 and are included under the topic Early Dumnould History in all our PDF Extended History products and printed products wherever possible.

Medieval translation of Gaelic names could not be referred to as an accurate process. Spelling was not yet standardized, and names in documents from that era are riddled with spelling variations. Dumnould has been written as Donald, Donaldson, Doneld, Donnald, Donnaldson and others.

Notable amongst the Clan from early times was Adam Donald (1703-1780), called 'the prophet of Bethelnie,' born at the hamlet of that name, twenty miles north of Aberdeen, in 1703. " Notwithstanding his extraordinary stature and build, which caused the country folk to regard him as a changeling 'supernatural in mind as well as in body,' he was unable from some infirmity to labour with his hands, while his parents, struggling peasants, could ill afford to maintain him. Donald had therefore to solve the perplexity of how to live. 'Observing,' says his biographer, 'with what a superstitious veneration the ignorant people...
Another 134 words (10 lines of text) are included under the topic Early Dumnould Notables in all our PDF Extended History products and printed products wherever possible.

Migration of the Dumnould family to Ireland

Some of the Dumnould family moved to Ireland, but this topic is not covered in this excerpt.
Another 90 words (6 lines of text) about their life in Ireland is included in all our PDF Extended History products and printed products wherever possible.

Migration of the Dumnould family

Many of the ancestors of Dalriadan families who arrived in North America still live in communities along the east coast of Canada and the United States. In the American War of Independence many of the original settlers traveled north to Canada as United Empire Loyalists. In the late 19th and early 20th centuries the ancestors of many Scots began recovering their collective national heritage through Clan societies, highland games, and other patriotic events. Research into the origins of individual families in North America revealed records of the immigration of a number of people bearing the name Dumnould or a variant listed above: Alexander Donald who settled in Georgia in 1775; Cornelius Donald settled in Maryland in 1776; Mary Donald settled in Pennsylvania in 1773; along with David, and Nash.