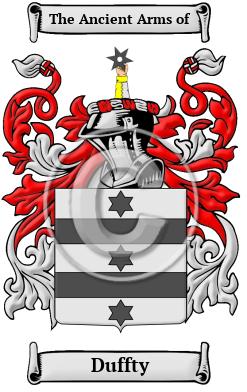 The name Duffty comes from the ancient Anglo-Saxon culture of Britain. It was a name for a person who was considered brave and strong. The surname Duffty originally derived from the Old English word doughty or dohti which meant valiant, hardy, manly. [1]

Early Origins of the Duffty family

The surname Duffty was first found in Yorkshire where early spellings of the name varied greatly.

Early History of the Duffty family

Notables of the family at this time include Thomas Doughty (1545-1578), an English nobleman, soldier, scholar and personal secretary of Christopher Hatton. His association with Francis Drake, on a 1577 voyage to interfere with Spanish treasure fleets, ended in a shipboard trial for treason and witchcraft and Doughty's execution. John Doughtie...
Another 50 words (4 lines of text) are included under the topic Early Duffty Notables in all our PDF Extended History products and printed products wherever possible.

Duffty Settlers in Australia in the 19th Century

Duffty Settlers in New Zealand in the 19th Century