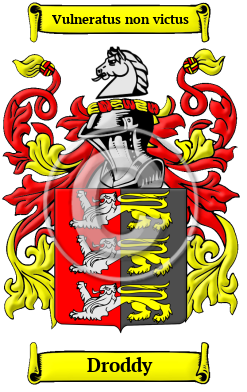 The surname Droddy is the anglicized version of the Irish surname "O Dreada." The surname has also been recorded in Galway where it is believed to be an anglicized form of the Connaught name O Draoda, a name usually anglicized as Drudy.

Early Origins of the Droddy family

The surname Droddy was first found in County Cork (Irish: Corcaigh) the ancient Kingdom of Deis Muin (Desmond), located on the southwest coast of Ireland in the province of Munster, where the name was listed in 16th century Fiants, and later in wills dating back to 1629.

Early History of the Droddy family

This web page shows only a small excerpt of our Droddy research. More information is included under the topic Early Droddy History in all our PDF Extended History products and printed products wherever possible.

Spelling variations of this family name include: Draddy, O'Draddy, Graddy, Drady and others.

More information is included under the topic Early Droddy Notables in all our PDF Extended History products and printed products wherever possible.

Droddy migration to the United States +

Droddy Settlers in United States in the 20th Century