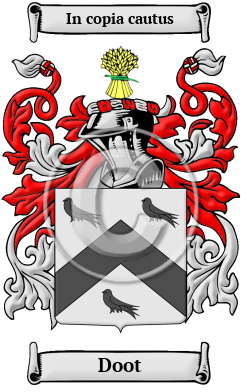 The surname Doot is a Welsh name of old Celtic origin. The surname is from one of the various related Old English personal names Dodd, Dodda, Dudd, or Dudda, which were all in common use until the 14th century. The name Doot may also be a nickname surname derived from the Germanic root "dudd" or "dodd," which means something rounded; thus, it would have been used to denote a round, lumpish person, or a stupid person. The surname Doot may also be derived from the Old English word "dydrian," which means deceiver or rascal, or from the word "dod," which means to make bare or to cut off. The application of the name Doot is obvious in the former case, while the nickname would denote a bald person in the latter case.

Early Origins of the Doot family

The surname Doot was first found in Cheshire, at Edge, a civil parish in the unitary authority of Cheshire West and Chester. George Ormerod (1785-1873) wrote the following about the family: "About the time of Henry II., Hova, son of Cadwgan Dot, married the daughter and heiress of the Lord of Edge, with whom he had the fourth of that manor. It is probable that the Lord of Edge was son of Edwin, who before the Conquest was sole proprietor of eight manors; we may call him a Saxon thane. It appears by Domesday that Dot was the Saxon lord of sixteen manors, from which all of which he was ejected; we may presume he was identical with Cadwgan Dot."

Early History of the Doot family

Welsh surnames are relatively few in number, but they have an inordinately large number of spelling variations. There are many factors that explain the preponderance of Welsh variants, but the earliest is found during the Middle Ages when Welsh surnames came into use. Scribes and church officials recorded names as they sounded, which often resulted in a single person's name being inconsistently recorded over his lifetime. The transliteration of Welsh names into English also accounts for many of the spelling variations: the unique Brythonic Celtic language of the Welsh had many sounds the English language was incapable of accurately reproducing. It was also common for members of a same surname to change their names slightly, in order to signify a branch loyalty within the family, a religious adherence, or even patriotic affiliations. For all of these reasons, the many spelling variations of particular Welsh names are very important. The surname Doot has occasionally been spelled Dodd, Dod, Dot, Dodds, Dods and others.

Prominent amongst the family during the late Middle Ages was Sir Anthony Dod of Edge, Commander of the English archers at the Battle of Agincourt. Henry Dod (1550?-1630?), was an English poet, of the old family of Dod, or Doddes, Cheshire. [1] John Dod (1549?-1645), was a Puritan divine, born at Shotlidge, near Malpas, Cheshire, in or about 1549, was the youngest of a family of seventeen. His parents were possessed of a moderate estate, and after he had received his early education at Westchester sent him when about fourteen to Jesus College, Cambridge, where he was elected scholar and afterwards fellow. Peirce...
Another 147 words (10 lines of text) are included under the topic Early Doot Notables in all our PDF Extended History products and printed products wherever possible.

Migration of the Doot family to Ireland

Some of the Doot family moved to Ireland, but this topic is not covered in this excerpt.
Another 73 words (5 lines of text) about their life in Ireland is included in all our PDF Extended History products and printed products wherever possible.

Migration of the Doot family

In the late 19th and early 20th centuries, many people from Wales joined the general migration to North America in search of land, work, and freedom. These immigrants greatly contributed to the rapid development of the new nations of Canada and the United States. They also added a rich and lasting cultural heritage to their newly adopted societies. Investigation of immigration and passenger lists has revealed a number of people bearing the name Doot: Laurence Dod who settled in New Hampshire in 1718; Thomas Dod settled in Barbados in 1679 with his wife Margaret; James Dod settled in Boston in 1635.