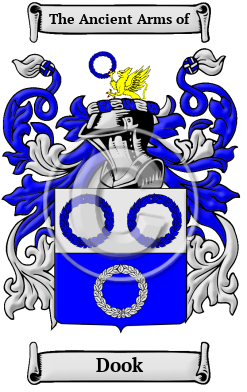 The origins of the Dook surname date from the ancient Anglo-Saxon culture of Britain. Their name originated with an early member who was a person who behaved in a regal or noble manner, like a Duke. The surname Dook is derived from the various Old English words duc, duk, duke, douc, and doke, which all came from the Old French word duc. This ultimately came from the Latin word dux, which means leader, and is a derivative of the verb ducere, which means to lead. Undoubtedly, this was often a nickname, since many captains or leaders of military forces were titled landholders who would have derived their surnames from their estates. Nevertheless, it may have also been applied as an occupational name to a military leader or to someone employed in a ducal household.

Early Origins of the Dook family

The surname Dook was first found in Devon having descended from Osmond le Duc, Alexander and Robert le Duke who were listed in the Magni Rotuli Scaccarii Normanniae 1180-98. [1] Roger le Duke was Lord Mayor of London from 1227 to 1230.

"Duke was the name of an old influential Sussex family dating back to the reign of Henry VI.. There are also a few of the name in Dorset. Duke is also a widely - spread name amongst the gentry of the south of England, many of the families being connected and bearing the same arms. From the Dukes of Power Hayes and Otterton, Devon, sprang the Dukes of Wiltshire. " [2]

Early History of the Dook family

The English language only became standardized in the last few centuries; therefore, spelling variations are common among early Anglo-Saxon names. As the form of the English language changed, even the spelling of literate people's names evolved. Dook has been recorded under many different variations, including Duke, Dukes, Dook, Dooke, Dooks, Dookes and others.

Notables of the family at this time include Sir Edward Duke, 1st Baronet (c.1604-1671), an English politician who sat in the House of Commons of England in 1640; and his son, Sir John Duke, 2nd Baronet (1632-1705), an English politician, Member of Parliament for Orford in 1679; and Edmund Duke (1563-1590), English Roman Catholic priest and martyr who was found in the presence of Richard...
Another 64 words (5 lines of text) are included under the topic Early Dook Notables in all our PDF Extended History products and printed products wherever possible.

Migration of the Dook family to Ireland

Some of the Dook family moved to Ireland, but this topic is not covered in this excerpt.
Another 79 words (6 lines of text) about their life in Ireland is included in all our PDF Extended History products and printed products wherever possible.

Dook migration to the United States +

For many English families, the political and religious disarray that shrouded England made the far away New World an attractive prospect. On cramped disease-ridden ships, thousands migrated to those British colonies that would eventually become Canada and the United States. Those hardy settlers that survived the journey often went on to make important contributions to the emerging nations in which they landed. Analysis of immigration records indicates that some of the first North American immigrants bore the name Dook or a variant listed above:

Dook Settlers in United States in the 19th Century