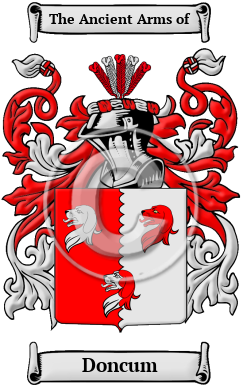 Of all the Anglo-Saxon names to come from Britain, Doncum is one of the most ancient. The name is a result of the original family having lived in the village of Duncombe, in Durham. There is also a Duncombe in Lancashire which is in the north country too. This local name was originally derived from the Old English word dun, which literally means hill. The second part of the name, comb was originally derived from the Old English word cumb, which refers to a short, straight valley. Therefore Duncombe was literally a hill in a short, straight valley. [1]

Early Origins of the Doncum family

The surname Doncum was first found in Buckinghamshire where early records show Richard de Ingen held a barony in this shire since the Domesday Book. [2]

"Duncombe or D'Engaine, [originated in] Engen or Ingen, near Boulogne, [Normandy, France]. Richard and William de Ingen accompanied the Conqueror. The former in 1086 held a barony in Buckinghamshire. Vitalis D'Ingen, his son, temp. Henry I., had Richard, who married a daughter of Alberic de Yer, Earl of Oxford, and was Baron of Blatherwick, Northamptonshire. His son, Richard D'Engaine, 1165, held in Buckinghamshire from Paganel of Dudley; and had, 1, Vitalis, ancestor of the Barons D'Engaine by writ, 1296; 2, Ralph D'Engaine (written Dungun or Dungeom in the Testa de Neville), [3] who held Holcombe, Oxford, and in 1253 as Ralph D'Ungun was Lord of Tingewick, Buckinghamshire." [4]

Early History of the Doncum family

The first dictionaries that appeared in the last few hundred years did much to standardize the English language. Before that time, spelling variations in names were a common occurrence. The language was changing, incorporating pieces of other languages, and the spelling of names changed with it. Doncum has been spelled many different ways, including Duncombe, Duncome, Duncomb, Duncome, Dunscomb, Dunscombe, Duncumb and many more.

Notables of the family at this time include Sir John Duncombe (1622-1687), an English politician, Chancellor of the Exchequer of England (1672-1676); Sir Charles Duncombe (1648-1711), English banker and politician who served as a Member of Parliament and Lord Mayor of the City of London; and William Duncombe (1690-1769), British author and playwright. Anthony Duncombe (died 1708), an English politician, Member of Parliament for Hedon (1698-1702) and (1702-1707.) Hi son, Anthony Duncombe (1695-1763), was Sheriff of London, who was created 1st Baron Feversham in 1747. He was later Lord Feversham, Baron of Downton, in the County of Wilts. However, Lord...
Another 99 words (7 lines of text) are included under the topic Early Doncum Notables in all our PDF Extended History products and printed products wherever possible.

Migration of the Doncum family