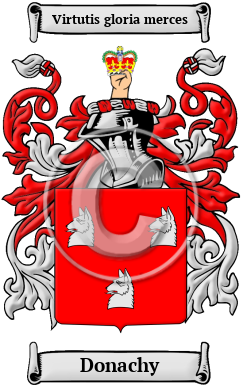 The forbears of the name Donachy are thought to be of the ancient Scottish kingdom of Dalriada. The name indicates that the first bearer lived on the lands of Stewart of Atholl. Anciently, they were known as Clan Donnachaidh, coming from the Gaelic name Donnachadh Reamhar, or Duncan the Stout, one of the Celtic Earls of Atholl. Most of the Clan took on the name Robertson, which comes from the personal name of 15th century Clan chief Robert Riach.

Early Origins of the Donachy family

The surname Donachy was first found in Perthshire (Gaelic: Siorrachd Pheairt) former county in the present day Council Area of Perth and Kinross, located in central Scotland, where they held a family seat from early times and their first records appeared on the census rolls taken by the ancient Kings of Scotland to determine the rate of taxation of their subjects.

Early History of the Donachy family

This web page shows only a small excerpt of our Donachy research. Another 131 words (9 lines of text) covering the years 1600 and 1650 are included under the topic Early Donachy History in all our PDF Extended History products and printed products wherever possible.

Medieval spelling was at best an intuitive process, and translation between Gaelic and English was no more effective. These factors caused an enormous number of spelling variations in Dalriadan names. In fact, it was not uncommon to see a father and son who spelled their name differently. Over the years, Donachy has been spelled Robertson, Conachie, Conaghy, Conacher, Conaghy, Conchie, Donnachie, Donachie and many more.

More information is included under the topic Early Donachy Notables in all our PDF Extended History products and printed products wherever possible.

Migration of the Donachy family to Ireland

Some of the Donachy family moved to Ireland, but this topic is not covered in this excerpt.
Another 60 words (4 lines of text) about their life in Ireland is included in all our PDF Extended History products and printed products wherever possible.

Donachy migration to the United States +

Many settled along the east coast of what would become the United States and Canada. As the American War of Independence broke out, those who remained loyal to the crown went north to Canada as United Empire Loyalists. The ancestors of all of these hardy Dalriadan-Scottish settlers began to recover their collective history in the 20th century with the advent of the vibrant culture fostered by highland games and Clan societies in North America. Highland games, clan societies, and other organizations generated much renewed interest in Scottish heritage in the 20th century. The Donachy were among the earliest of the Scottish settlers as immigration passenger lists have shown:

Donachy Settlers in United States in the 19th Century

Donachy Settlers in New Zealand in the 19th Century