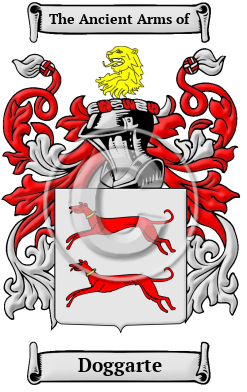 The etymology of the name Doggarte is indeed interesting for the variety of postulations made by researchers. Harrison believes the name to from the Anglo-Saxon personal name "Dogod." [1] Lower believes the name to be "an old London name, probably corrupted from Dowgate, one of the Roman gateways of the city." [2] another source believs the name to be Norman "from Doket, or Duket. Radulphus Doucet of Normandy 1180; Nicholas Douchet 1195 (Magni Rotuli Scaccarii Normanniae)." [3] And finally, Bardsley contends "this surname is derived from the name of an ancestor. 'the son of Doget.' By its universal distribution (without prefix) this is manifestly a personal name." [4] We do agree that the universal use of the name is widespread.

Early Origins of the Doggarte family

The surname Doggarte was first found in the Hundredorum Rolls of 1273, where we find Alicia Doget, Cambridgeshire; John Doget, Oxfordshire; and John Doget, London. The Yorkshire Poll Tax Rolls of 1379 list Hugo Doged; and Johannes Doget. [4]

Early History of the Doggarte family

Outstanding amongst the family at this time was Andrew Doket or Ducket (d. 1484), the first president of Queens' College, Cambridge, was, according to Dr. Caius and Archbishop Parker, principal of St. Bernard's Hostel, of which he may probably have been the founder, and certainly was the owner. [6] John Doget (died 1501), was an English diplomat, scholar...
Another 56 words (4 lines of text) are included under the topic Early Doggarte Notables in all our PDF Extended History products and printed products wherever possible.

Migration of the Doggarte family to Ireland

Some of the Doggarte family moved to Ireland, but this topic is not covered in this excerpt.
Another 92 words (7 lines of text) about their life in Ireland is included in all our PDF Extended History products and printed products wherever possible.

Migration of the Doggarte family