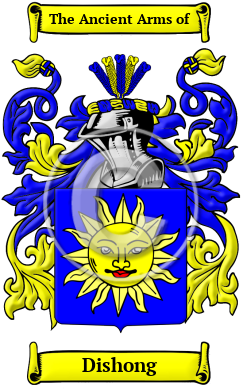 The name Dishong is from the ancient Anglo-Saxon culture of the Britain and comes from the medieval personal name Dennis. Dishong is a metronymic surname, which belongs to the category of hereditary surnames. In this case, the surname comes from the first name of the mother, or of another female ancestor of the bearer. It was common for second sons to take the name of their mother as a surname in the Middle Ages. In general, where patronymic surnames were used, the first son adopted the given name of his father as a surname. This type of surname is the most common form of hereditary surname. The earliest origins of this family were found in the county of Worcestershire, where they had been settled prior to the Norman Conquest, in 1066.

Early Origins of the Dishong family

The surname Dishong was first found in London where Richard Dysun was listed in the Hundredorum Rolls of 1274. Later, Ralph Dyson was listed in the Subsidy Rolls for Sussex in 1296 and John Dysone was found in the Subsidy Rolls for Worcestershire in 1327. John Dyesson was a Freeman of York in 1387. John, son of Dionysia de Langside is also called John Dyson de Langside in 1369. [1]

"Dy or Dye, whence the patronymic Dyson. Almost all our Dysons hail from Yorkshire, where the font-name had a popularity second only to those of Matilda and Isabel. " [2]

"Dyson is a name now numerous in the Huddersfield district [of West Yorkshire]. It was well established in the parish of Ecclesfield during the reign of Elizabeth I." [3]

Early History of the Dishong family

The first dictionaries that appeared in the last few hundred years did much to standardize the English language. Before that time, spelling variations in names were a common occurrence. The language was changing, incorporating pieces of other languages, and the spelling of names changed with it. Dishong has been spelled many different ways, including Dyson, Dison, Disson, Dysson and others.

Notables of this surname at this time include: Jeremiah Dyson (1722-1776), English civil servant and politician who has been tersely described as ‘by birth a tailor, by education a dissenter, and from interest or vanity in his earlier years a republican.’ His father, whether a tailor or not, left considerable means to his son, who, it is established by many witnesses, professed in early life the extremist principles of Whiggism. For two years he studied at the university of Edinburgh, and ‘Jupiter’ Carlyle bears testimony to his ‘perfect idea of the constitution of the church of Scotland, and the nature and...
Another 280 words (20 lines of text) are included under the topic Early Dishong Notables in all our PDF Extended History products and printed products wherever possible.

Dishong migration to the United States +

Thousands of English families in this era began to emigrate the New World in search of land and freedom from religious and political persecution. Although the passage was expensive and the ships were dark, crowded, and unsafe, those who made the voyage safely were rewarded with opportunities unavailable to them in their homeland. Research into passenger and immigration lists has revealed some of the very first Dishongs to arrive in North America:

Dishong Settlers in United States in the 18th Century