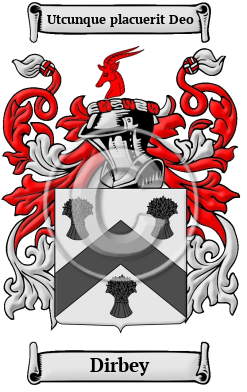 The ancestors of the Dirbey surname lived among the ancient Anglo-Saxon culture. The name comes from when they lived in the county of Derbyshire. The place-name was originally derived from the Old English word Doer-by or Derby which was listed in the Domesday Book and literally meant a "farmstead or village where deer are kept." [1]

Early Origins of the Dirbey family

The first recorded instance of the family was Roger de Derby who held estates in the year 1160. The Hundredorum Rolls of 1278 list Edelota Darby in Oxfordshire and later the Assize Rolls of Essex listed Simon Derby in 1377. [3]

Over in Lancashire, the Lay Subsidy Rolls of 1332 listed Robert de Derby as living there and later the Yorkshire Poll Tax Rolls of 1379 listed: Robertas de Derby; Johannes Derby; and Nicholaos de Derby. [2]

"Darby and Joan" is a proverbial phrase for a loving married couple in England that was inspired by John Darby (died 1730) and his wife Joan. They were first mentioned in a poem published in The Gentleman's Magazine by Henry Woodfall in 1735. Woodfall was in fact, an apprentice to John Darby, a printer in Bartholomew Close, London. This first poem inspired others by St. John Honeywood and Frederic Edward Weatherly and the characters are referenced in works by Robert Louis Stevenson and Lord Byron.

Early History of the Dirbey family

Before English spelling was standardized a few hundred years ago, spelling variations of names were a common occurrence. Elements of Latin, French and other languages became incorporated into English through the Middle Ages, and name spellings changed even among the literate. The variations of the surname Dirbey include Darby, Derby, Darbyshire, Derbyshire, Darbie, Darbey, Derbie, Derbey, Darbishire and many more.

Notables of the family at this time include Abraham Darby I (1678-1717), an English Quaker ironmaster & pioneer of coke-fired smelting, the first and most well known of three generations of people who held the same name. He...
Another 38 words (3 lines of text) are included under the topic Early Dirbey Notables in all our PDF Extended History products and printed products wherever possible.

Migration of the Dirbey family to Ireland

Some of the Dirbey family moved to Ireland, but this topic is not covered in this excerpt.
Another 182 words (13 lines of text) about their life in Ireland is included in all our PDF Extended History products and printed products wherever possible.

Migration of the Dirbey family

A great wave of immigration to the New World was the result of the enormous political and religious disarray that struck England at that time. Families left for the New World in extremely large numbers. The long journey was the end of many immigrants and many more arrived sick and starving. Still, those who made it were rewarded with an opportunity far greater than they had known at home in England. These emigrant families went on to make significant contributions to these emerging colonies in which they settled. Some of the first North American settlers carried this name or one of its variants: Ann Darby who settled in Virginia in 1650; Elizabeth Darby settled in Barbados in 1670; Captain Darby settled in Boston Massachusetts in 1766; Chal Darby settled in Charles Town [Charleston], South Carolina in 1766.