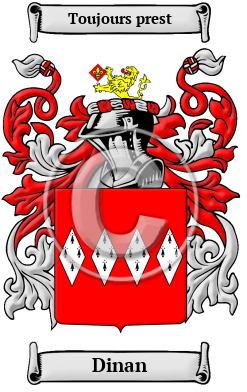 The origins of the Dinan name lie with England's ancient Anglo-Saxon culture. It comes from when the family lived "the dayman," a dairyman or alternatively from the occupation of a "day's man," which was a servant of the keeper of a dairy. [1]

Early Origins of the Dinan family

The surname Dinan was first found in Devon where they quickly rose to be Barons Dinham shortly after the Conquest as they claimed descendancy from the Viscounts Dinant of Bretagne. [2] Some of the family were found at Steeple Aston in Oxfordshire in ancient times; unfortunately one can presume there is now little evidence of their history. "In a chapel on the north side of the chancel are recumbent effigies of Sir Francis Page and his lady, to whom the manor of Middle Aston formerly belonged: Sir Francis destroyed some monuments of the Dinham family to make room for his own, which was erected in his life-time." [3]

We did find this interesting passage about the family. "Whether these Cardinans were the ancestors of the Dynhams, or Dinhams, by whom these possessions were afterwards inherited, has been a subject of dispute; some contending that they belong to the same family, and others arguing that the latter is a distinct race. By those who contend for the distinction between these families, it is said, that Isolda, the descendant, perhaps the grand-daughter, of Robert de Cardinan, being the heiress to his estates, brought this property by marriage to Thomas de Tracy, who in the year 1257 was one of the greatest landholders in Cornwall. This lady, who was left a widow, conveyed this manor as Isolda de Cardinan, who had been the wife of Thomas Tracy, to Oliver de Dinant, or Dinan, in the year 1259; which family of Dinan is said to have taken their name from Dinan in Brittany, where they had founded a monastery, and erected a castle, at a very distant period. During these descents, the name was indifferently written Dynam or Dinham, but in process of time the latter finally prevailed. In the reign of Henry VI. John Dinham, Esq. of Cardinham, who was sheriff of Devon, and resided on his barton of Nutwell." [4]

"Part of the manor of Lanherne, and Kankewas, [in the manor of St. Evall, Cornwall], with all the manorial rights connected with it, was purchased by Mr. John Dayman. " [4]

Early History of the Dinan family

This web page shows only a small excerpt of our Dinan research. Another 140 words (10 lines of text) covering the years 1221, 1224, 1332, 1379 and 1695 are included under the topic Early Dinan History in all our PDF Extended History products and printed products wherever possible.

Before the last few hundred years, the English language had no fast system of spelling rules. For that reason, spelling variations are commonly found in early Anglo-Saxon surnames. Over the years, many variations of the name Dinan were recorded, including De Dinant, Dinan, Dinam, Dinham, Diamond, Dymond, Dyment, Diment, Dymott, Dimont and many more.

More information is included under the topic Early Dinan Notables in all our PDF Extended History products and printed products wherever possible.

In the United States, the name Dinan is the 12,441st most popular surname with an estimated 2,487 people with that name. [5]

Dinan migration to the United States +

To escape oppression and starvation at that time, many English families left for the "open frontiers" of the New World with all its perceived opportunities. In droves people migrated to the many British colonies, those in North America in particular, paying high rates for passages in cramped, unsafe ships. Although many of the settlers did not make the long passage alive, those who did see the shores of North America perceived great opportunities before them. Many of the families that came from England went on to make essential contributions to the emerging nations of Canada and the United States. Research into various historical records revealed some of first members of the Dinan family emigrate to North America:

Dinan Settlers in United States in the 19th Century

Dinan Settlers in Canada in the 19th Century

Dinan Settlers in Australia in the 19th Century

Dinan Settlers in New Zealand in the 19th Century