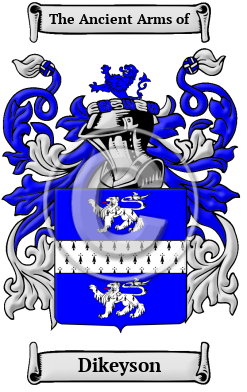 The origins of the name Dikeyson are from the ancient Anglo-Saxon culture of Britain. It is derived from the personal name Richard. Dicca (in the modern form, Dick) is a diminutive of the name Richard. When the son suffix is added to the root, the name literally means son of Richard. [1] "Richard was commonly called Dick, and his sons, were styled 'Dickson' and 'Dickieson.' " [2]

Early Origins of the Dikeyson family

The surname Dikeyson was first found in Lancashire at Wrightington, a township, in the parish of Eccleston, union of Wigan, hundred of Leyland. "Robert Dicconson, of Eccleston, married Anne, daughter of John Wrightington, and was grandfather of William, who was convicted of high treason in the reign of William III. The Dicconsons held the property until 1812, when Capt. Edward Dicconson died without issue, and was succeeded by a nephew, Thomas Eccleston, of Eccleston and Scarisbrick. His son Charles, on succeeding to this estate, assumed the name of Dicconson." [3]

Early History of the Dikeyson family

Sound was what guided spelling in the essentially pre-literate Middle Ages, so one person's name was often recorded under several variations during a single lifetime. Also, before the advent of the printing press and the first dictionaries, the English language was not standardized. Therefore, spelling variations were common, even among the names of the most literate people. Known variations of the Dikeyson family name include Dickieson, Dickinson, Dickeson, Dickenson and others.

Notables of the family at this time include John Dickenson ( fl. 1594), English romance-writer of unknown origin. [4] Jonathan Dickinson (1663-1722) was a Quaker merchant from Port Royal, Jamaica who was shipwrecked on the southeast coast of Florida in 1696, along with his family and the other passengers and crew members of the ship. He twice served as Mayor of Philadelphia, in 1712-1713 and 1717-1719. His journal was reprinted sixteen times in English, and three times each in Dutch and German translations, between...
Another 82 words (6 lines of text) are included under the topic Early Dikeyson Notables in all our PDF Extended History products and printed products wherever possible.

Migration of the Dikeyson family to Ireland

Some of the Dikeyson family moved to Ireland, but this topic is not covered in this excerpt. More information about their life in Ireland is included in all our PDF Extended History products and printed products wherever possible.

Migration of the Dikeyson family

For political, religious, and economic reasons, thousands of English families boarded ships for Ireland, the Canadas, the America colonies, and many of smaller tropical colonies in the hope of finding better lives abroad. Although the passage on the cramped, dank ships caused many to arrive in the New World diseased and starving, those families that survived the trip often went on to make valuable contributions to those new societies to which they arrived. Early immigrants bearing the Dikeyson surname or a spelling variation of the name include: Nathaniel Dickerson who was a Town clerk of Wethersfield, Massachusetts, and Philemon Dickinson who was a tanner of Salem, also in the same state. In 1642 Thomas Dickieson moved to New Haven, Connecticut. John Dickeson landed in Virginia in 1669. One branch of the family sailed to Barbados. By 1852 Edward Dickenson had moved as far west as San Francisco Cal..