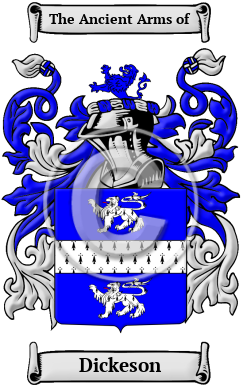 The name Dickeson originated with the Anglo-Saxon tribes that once ruled Britain. It is derived from the personal name Richard. Dicca (in the modern form, Dick) is a diminutive of the name Richard. When the son suffix is added to the root, the name literally means son of Richard. [1] "Richard was commonly called Dick, and his sons, were styled 'Dickson' and 'Dickieson.' " [2]

Early Origins of the Dickeson family

The surname Dickeson was first found in Lancashire at Wrightington, a township, in the parish of Eccleston, union of Wigan, hundred of Leyland. "Robert Dicconson, of Eccleston, married Anne, daughter of John Wrightington, and was grandfather of William, who was convicted of high treason in the reign of William III. The Dicconsons held the property until 1812, when Capt. Edward Dicconson died without issue, and was succeeded by a nephew, Thomas Eccleston, of Eccleston and Scarisbrick. His son Charles, on succeeding to this estate, assumed the name of Dicconson." [3]

Early History of the Dickeson family

One relatively recent invention that did much to standardize English spelling was the printing press. However, before its invention even the most literate people recorded their names according to sound rather than spelling. The spelling variations under which the name Dickeson has appeared include Dickieson, Dickinson, Dickeson, Dickenson and others.

Notables of the family at this time include John Dickenson ( fl. 1594), English romance-writer of unknown origin. [4] Jonathan Dickinson (1663-1722) was a Quaker merchant from Port Royal, Jamaica who was shipwrecked on the southeast coast of Florida in 1696, along with his family and the other passengers and crew members of the ship. He twice served as Mayor of Philadelphia, in 1712-1713 and 1717-1719. His journal was reprinted sixteen times in English, and three times each in Dutch and German translations, between...
Another 82 words (6 lines of text) are included under the topic Early Dickeson Notables in all our PDF Extended History products and printed products wherever possible.

Migration of the Dickeson family to Ireland

Some of the Dickeson family moved to Ireland, but this topic is not covered in this excerpt. More information about their life in Ireland is included in all our PDF Extended History products and printed products wherever possible.

Dickeson migration to the United States +

At this time, the shores of the New World beckoned many English families that felt that the social climate in England was oppressive and lacked opportunity for change. Thousands left England at great expense in ships that were overcrowded and full of disease. A great portion of these settlers never survived the journey and even a greater number arrived sick, starving, and without a penny. The survivors, however, were often greeted with greater opportunity than they could have experienced back home. These English settlers made significant contributions to those colonies that would eventually become the United States and Canada. An examination of early immigration records and passenger ship lists revealed that people bearing the name Dickeson arrived in North America very early:

Dickeson Settlers in United States in the 17th Century

Dickeson Settlers in United States in the 18th Century

Dickeson Settlers in New Zealand in the 19th Century