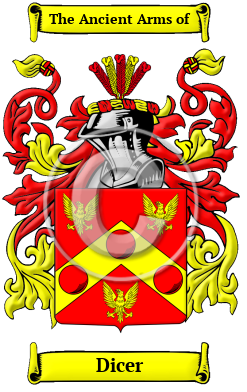 Early Origins of the Dicer family

The surname Dicer was first found in Norfolk, at Diss, a market-town and parish, in the union of Depwade, hundred of Diss. [1] [2]

"Formerly, Disce or Dice, was held in royal demesne in the reign of Henry I., and in that of Edward I. became the property of Robert Fitzwalter, who obtained for it the privilege of a market." [3]

But the earliest record of the family was found in Essex, where the Hundredorum Rolls of 1273 list William de Disse, as holding lands there at that time. [5] Richard Dyse held estates in Suffolk in 1327. [6]

The parish dates back to at least the Domesday Book of 1086 when it was first listed as Dice and at that time and for years later, it was part of Suffolk. Literally the place name means "place at the ditch or dike," from the Anglo-Saxon word "dic." [7]

Walter Diss or Dysse (d. 1404?), was a "Carmelite and is supposed to have been a native of the town of Diss, twenty-two miles south-west of Norwich, and to have been educated in the Carmelite house of the latter city." [8]

Further to the north in Scotland, the name was derived from "an old burgess family of Aberdeenshire who derived their name from the lands of Dyce in the parish of the same name. The first of the name recorded appears to have been John de Diss who was admitted burgess of Aberdeen in 1467. " [9]

Early History of the Dicer family

This web page shows only a small excerpt of our Dicer research. Another 92 words (7 lines of text) covering the years 1663, 1473 and 1482 are included under the topic Early Dicer History in all our PDF Extended History products and printed products wherever possible.

Spelling variations of this family name include: Dicer, Dyser, Dice, Dyse, Dyce, Dycer and others.

More information is included under the topic Early Dicer Notables in all our PDF Extended History products and printed products wherever possible.

Dicer migration to the United States +

Dicer Settlers in United States in the 18th Century